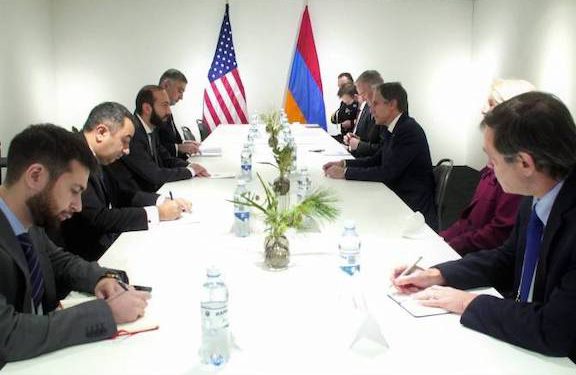 Secretary of State Antony Blinken and Armenia’s Foreign Minister Ararat Mirzoyan discussed the Karabakh conflict settlement process when they met Thursday on the margins of the OSCE Ministerial Meeting in Stockholm, Sweden.

While discussing regional security and stability issues, Mirzoyan briefed Blinked about the situation that has been created when Azerbaijani forces breached Armenia’s sovereign border in May and the continued armed aggression against Armenia and its residents.

The two top diplomats highlighted the steps being taken to de-escalate the situation,

The Nagorno Karabakh conflict was also on the agenda of the meeting, with the two leaders addressing the urgent humanitarian issues caused by the 44-Day War unleashed by Azerbaijan against Artsakh. The need to repatriate Armenian prisoners of war, hostages and other detainees was also emphasized.

Mirzoyan and Blinken stressed the need for the complete resumption of the peace process aimed at the comprehensive settlement of the Nagorno-Karabakh conflict under the mandate of the OSCE Minsk Group Co-Chairs. The role of the United States as a Co-chair country was also highlighted.

“In the Caucasus, we do welcome the resumption of direct dialogue between the governments of Armenia and Azerbaijan, and we urge them to make progress on humanitarian issues including detainees, demining, missing persons, with investigations of alleged human rights abuses and violations of international humanitarian law with the perpetrators held accountable. And I hope there, we can all work together including with Russia to continue to make progress,” Blinken said in a statement issued prior to talks with Mirzoyan.

“We urge all parties to resolve other outstanding issues like border delimitation and demarcation, the restoration of economic and transport links, and to continue to engage with the Minsk Group co-chairs for a lasting peaceful end to the Nagorno Karabakh conflict,” added Blinken.

During the meeting, Mirzoyan voiced satisfaction with the U.S. support for democratic development in Armenia, the strengthening of the capacities of state structures, rule of law and the fight against corruption. Blinken expressed the U.S.’ complete support for the process of democratic reforms in Armenia.

Mirzoyan also praised the United States’ resolute position on the issue of the Armenian Genocide recognition. In this context, referring to President Joe Biden’s statement recognizing the Armenian Genocide earlier this year, the foreign minister said that through the April 24 statement, the U.S. has emphasized it commitment to protecting human rights upholding those values and principles.