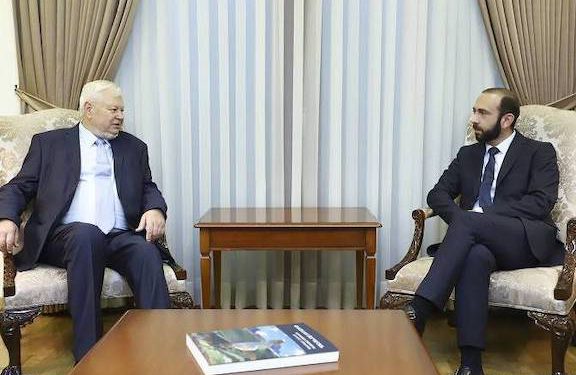 Foreign Minister Ararat Mirzoyan (right) meets with the personal representative of the OSCE Chairman-in-Office Andrzej Kasprzyk in Yerevan on Aug. 3

Foreign Minister Ararat Mirzoyan condemned Azerbaijan’s attempts to destabilize the situation after days of attack by Azerbaijani forces in Artsakh, as a result of which two soldiers were killed and 19 others were wounded on Wednesday.

Meeting with the personal representative of the OSCE Chairman-in-Office Andrzej Kasprzyk, Mirzoyan provided a briefing on the latest security situation in the region, also condemning what he called “arbitrary interpretation” of agreements between Yerevan, Baku and Moscow.

The foreign ministry reported that Mirzoyan also stressed “the importance of the targeted assessments of the situation by the international community and, particularly, by the OSCE Minsk Group co-chairing countries.”

Meanwhile, the OSCE chairmanship, which this year is being held by Poland, voiced extreme concern about the most recent “armed incidents and casualties in the South Caucasus.”

“We call on Armenia and Azerbaijan to take all necessary measures to bring de-escalation and resume dialogue. We remain committed to support all efforts aimed at consolidating peace in the region,” the Polish presidency said in a statement posted on Twitter.

Official Yerevan has been largely silent as the new wave of Azerbaijani attacks began on Monday. Mirzoyan held a telephone conversation with this Russian counterpart, Sergei Lavrov, while the vacationing Prime Minister Nikol Pashinyan had a similar discussion with President Vladimir Putin of Armenia.

On Tuesday, Russia’s Defense Ministry said in a statement that Azerbaijan violated the ceasefire in its attempts to breach the line of contact in Karabakh.

Armenia’s Human Right Defender Kristine Grigoryan said in a statement on Wednesday that Azerbaijan’s military aggression “directly threatens and essentially nullifies any guarantee of the right to life of people living in Artsakh, which is the most vital component of peace.”

She called on Azerbaijan to “immediately cease its criminal actions.”

“On the 1st and 2nd of August, and today, the Azerbaijani side conducted aggressive military operations in the zone of responsibility of the Russian peacekeeping mission in various directions in Artsakh, using weapons of various calibers, grenade launchers, and attack unmanned aerial vehicles,” Grigoryan.

“These acts grossly violate the principles of international law on the prohibition on the use of force and the threat of use of force, as well as the obligations of the Azerbaijani state under the trilateral agreement of November 9, 2020,” explained Grigoryan.

“I have called upon the ambassadors of the Minsk Group Co-Chairing Countries, and other international actors involved in the conflict resolution process to undertake maximum efforts in the direction of truly guaranteeing the right to life of the peaceful population of Artsakh,” said Grigoryan in her statement, which also that “this encroachment on the right to life and other fundamental rights of the civilian population must receive its true assessment.”

This story was updated to reflect that the number of injured has changed to 19.