Mirzoyan Says ‘Zangezur Corridor’ Not Being Discussed; No ‘Tangible Progress’ in Turkey Talks 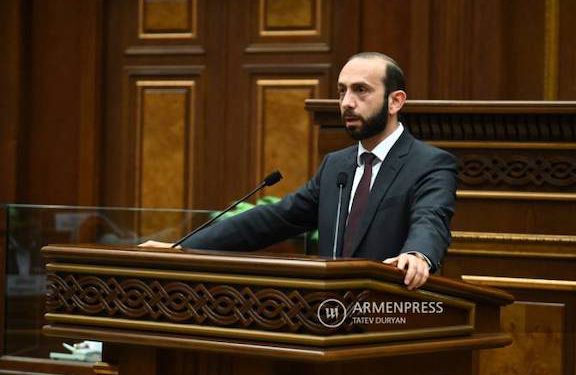 Foreign Minister Ararat Mirzoyan on Wednesday told lawmakers that talks underway to open transport links between Armenia and Azerbaijan do not include discussions of the so-called “Zangezur Corridor.” He also reported that there has been no “tangible progress” in ongoing talks to normalize relations with Turkey.

“I do not consider it superfluous to note that the so-called ‘Zangezur corridor,’ in the manner in which it has been exaggerated by Azerbaijan over these one and a half to two years is unacceptable for us. And there seems to be a general understanding that this will not be the case. Economic communications will open according to the parameters that are acceptable to us,” Mirzoyan said during a question and answer session in parliament.

The corridor idea is a scheme being advanced by President Ilham Aliyev of Azerbaijan, who wants to link mainland Azerbaijan with Nakhichevan through Armenia. He claimed on Tuesday that a consensus on the so-called project was reached during his meeting with Prime Minister Nikol Pashinyan in Brussels earlier this week, telling his Turkish counterpart, Recept Tayyip Erdogan, that the meeting was “positive.”

Mirzoyan said some progress has been made in the negotiations with Azerbaijan in some areas. At the same time, on a number of other issues, he said, the parties are trying to find common ground.

“For example, there is progress in the work of commissions on delimitation and demarcation,” the minister explained, citing a meeting Tuesday between the deputy prime ministers of Armenia and Azerbaijan that kickstarted the border delimitation process.

During their meeting in Brussels hosted by European Council President Charles Michel, Pashinyan and Aliyev agreed to kick-start the border delimitation and demarcation process and accordingly each leader appointed a commission that will negotiate the effort, led by the deputy prime ministers from the two countries.

It was announced Wednesday that a follow-up second meeting on the matter was scheduled to be held next week in Moscow.

Mirzoyan also said that the effort to open transit routs between Armenia and Azerbaijan was an important aspect of the border demarcation, claiming that sides have some similarities in approaches to this process.

“For example,” he said, “we are talking about the fact that all unblocked communications remain under the jurisdiction of the countries through which they pass.”

The foreign minister was not so upbeat about the process of normalizing relations with Turkey and complained of Ankara’s continues coordination of the process with Azerbaijan.

“At the moment, I can only say that, unfortunately, no matter how much the process is said to be taking place without preconditions, our Turkish partners, to a certain extent, synchronize it with the relations developing between Armenia and Azerbaijan. They make it part of their narrative,” Mirzoyan explained.

He said while Ankara is not blatantly making it a precondition, but such an approach does not bode well for a constructive atmosphere. However, Mirzoyan said, discussions will continue.

“But, unfortunately, there is no tangible progress yet. Armenia’s position remains the same. Armenia wants and is ready to normalize relations and open borders.  We would like to see the same from Turkey,” said Mirzoyan.