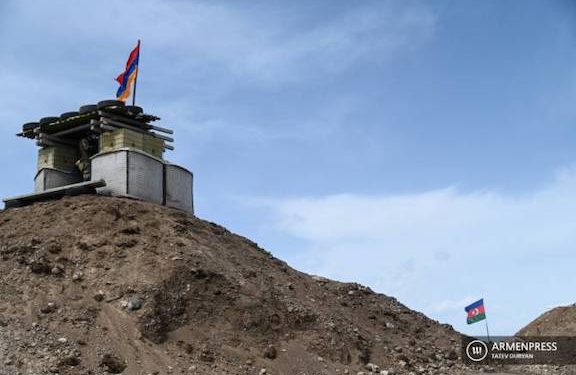 Despite Azerbaijan’s overt breach of Armenia’s sovereign borders, official Moscow on Tuesday continued to advance its own agenda by claiming that the delimitation of the Armenia-Azerbaijan border would be a “long term solution” in de-escalation of tensions between the two foes.

In a statement issued on Tuesday, Russia’s Foreign Ministry claimed that it is “closely monitoring the situation related to the border incident between Armenia and Azerbaijan,” adding that Russia “supports Yerevan and Baku in reducing the tensions.”

Late last week, Azerbaijani forces breached Armenia’s border and advanced several kilometers into the Syunik and Gegharkunik provinces. Since then a reported 250 Azerbaijani soldiers have decamped around the Sev Lidj (Black Lake) region in Syunik. Weekend negotiations were stalled and officials from Armenia, Azerbaijan and Russia are set to resume talks on Wednesday.

Moscow called for the “strict observance” of the November 9, 2020 agreement, in the text of which the delimitation, or demarcation, of the Armenia-Azerbaijan border is not referenced. In its statement on Tuesday, the Russian Foreign Ministry also called on the sides to follow through on an agreement—signed by the presidents of Russia and Azerbaijan, as well as Armenia’s prime minister—that addresses the opening of the borders, or communications, between Armenia and Azerbaijan.

“We believe that such incidents need to be solved exclusively through peaceful, negotiated means. We see the launch of delimitation process of the Armenian-Azerbaijani border as a long-term solution, with its subsequent demarcation. The Russian Federation is ready to contribute in every possible way to the consistent settlement of the situation in the South Caucasus,” said the Russian Foreign Ministry.

“Regarding the situation at the Armenian-Azerbaijani border, after this incident the Azerbaijani side was making statements explaining the occurrence with a misunderstanding, and most importantly, the absence of a border, which should’ve been delimitated and demarcated. No one has ever dealt with this there. We’ve recommended the parties to deal with it. We are ready to support them in both providing cartographic materials and rendering consultative services,” TASS quoted Lavrov as saying.

On Tuesday, Armenia’s Defense Ministry warned that any encroachment on Armenia’s sovereign territories “is absolutely unacceptable,” calling on the Azerbaijani military to leave the territory of the Republic of Armenia. “In the event that the Azerbaijani military does not return to its initial positions without preconditions, the Armed Forces of Armenia reserve the right to resolve the issue by other means, including force,” said the Defense Ministry.

On Friday, Armenia officially asked Russia and the Russian-led Collective Security Treaty Organization—the CSTO—for help in resolving what Yerevan called a deliberate effort by Baku to “provoke an armed clash.”

Moscow has yet to respond to Yerevan’s request for assistance.