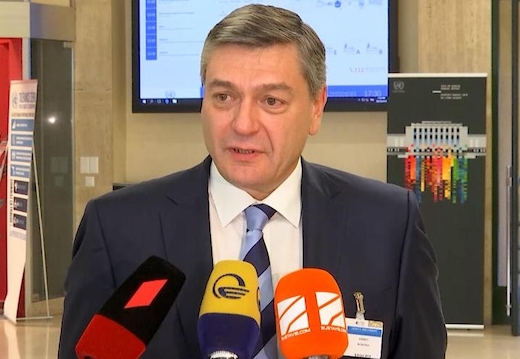 Official Moscow is convinced that the OSCE Minsk Group should play a leading role in advancing a settlement for the Karabakh conflict, Russia’s Deputy Foreign Minister Andrei Rudenko said in an interview on Sunday.

Late last week, Azerbaijani President Ilham Aliyev said in a speech delivered at the virtual summit of the Cooperation Council of Turkic-speaking States that the OSCE Minks Group co-chairs played “zero” role in resolving the conflict, claiming that his policy of aggression ensured a “victory” for Azerbaijan.

“We are convinced that the format of the OSCE Minsk Group Co-Chairs should play a leading role in the future in overcoming the consequences of the crisis and in finding ways for a lasting and long-term political and diplomatic solution to the conflict,” Rudenko told the Moscow-Baku news agency in an interview.

He also claimed that main principles outlined in the November 9 agreement that ended military actions in Karabakh were based on what was developed by the Minsk Group co-chairs.

“The main settlement principles developed by the OSCE Minsk Group Co-Chair are the basis of the statement by the leaders of Russia, Azerbaijan, and Armenia on November 9, 2020, on the ceasefire and the cessation of all hostilities in the Nagorno-Karabakh conflict zone,” explained Rudenko, adding the Russia, as one of the Minsk Group co-chairing, worked closely with the other two—United States and France—to stop the bloodshed.

Russia’s deputy foreign minister also remarked about Armenia’s upcoming snap parliamentary elections, scheduled to take place in June, calling on all political forces to exercise restrain ahead of the polls.

In a separate interview on Friday with the Armenian Novoye Vremya newspaper, Rudenko said that Moscow cannot be indifference to the goings on in Armenia, despite the fact the elections are Armenia’s domestic business

“We call on all political forces in the republic to show restraint and look for reasonable compromises to consolidate Armenian society. We express hope that during the pre-election period everything will go peacefully and within the framework of the constitution and serve as a starting point for achieving long-term stability in Armenia,” he told Novoye Vremyan when asked whether Moscow supports any of the Armenian election contenders.

Rudenko insisted that Russian-Armenian relations have been “developing dynamically at various levels and regardless of any external or internal developments,” despite certain circles with close ties to the Kremlin recently claiming a schism between Russian President Vladimir Putin and Prime Minister Nikol Pashinyan, reported Azatutyun.am.

As an example Rudenko cited the more than 60 phone calls held between Putin and Pashinyan as a measurement of the “dynamic” relations. Reportedly, most of the 60-plus calls took place during last fall’s Karabakh war.