Moscow Wants to Work with Ankara to ‘Normalize’ Yerevan-Baku Ties 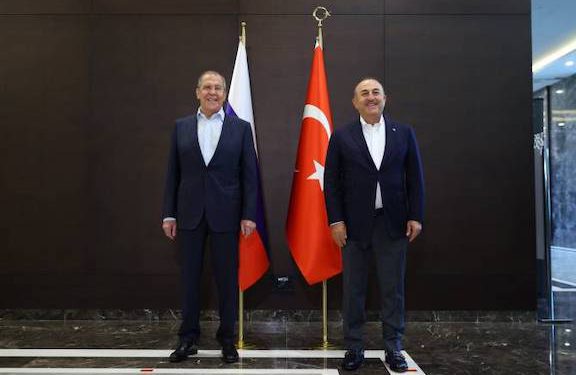 The foreign ministers of Russia and Turkey Sergei Lavrov (left) Mevlüt Çavuşoğlu met in in Antalya, Turkey on June 30

Moscow and Ankara want to contribute with joint efforts to the normalization of practical cooperation between Baku and Yerevan, Russia’s foreign minister Sergei Lavrov told reporters after a meeting with his Turkish counterpart Mevlüt Çavuşoğlu in Antalya, Turkey on Wednesday.

“We agreed to closely coordinate our efforts for assisting Baku and Yerevan to solve the practical issues related with the normalization of relations, focusing on the strengthening of confidence measures,” Lavrov said, according to the TASS news agency.

Lavrov and Çavuşoğlu reportedly discussed wide range of international issues, including the situation in Syria, Libya and Nagorno Karabakh during the meeting, added TASS.

Meanwhile, Russia’s President Vladimir Putin, continued to ignore the Azerbaijan’s ongoing aggression against Armenia and during remarks streamed live on social media he said that neither Armenia, nor Azerbaijan, nor the population of Nagorno Karabakh are interested in the continuation of the conflict.

“If we all live in peace and solidarity, conditions will be created for improving people’s lives not only in the sense of security, but in daily life – providing families,” said Putin.

“Social and economic development is something that Karabakh needs very much, and that is impossible when people are living in constant concern that the armed conflict will resume. The leaderships of both Armenia and Azerbaijan understand this,” added Putin.

The Russian president added there are many problems in Nagorno Karabakh, which are related with the restoration of infrastructures, delimitation and demarcation of borders, particularly, in the areas where there have never been state borders.

“At the moment these efforts are being carried out. We have set up a special trilateral group, comprised of Russia, Armenia and Azerbaijan, and we will spare no efforts for establishing normal relations in the region,” said Putin. “Of course the beneficiaries of these efforts will be the residents of Nagorno Karabakh. I want hope so, despite the difficulties that have accumulated during decades.”