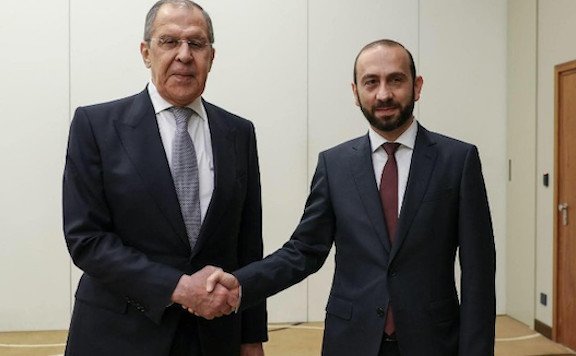 The foreign ministers of Armenia and Russia, Ararat Mirzoyan and Sergei Lavrov, on Monday discussed the implementation of agreements reached between Russia, Armenia and Azerbaijan, specifically ways to improve regional cooperation.

The documents in question are the November 9 agreement, which ended the military actions in Artsakh and the January 11 document, calling for the opening of transport links in the region, specifically between Armenia and Azerbaijan.

The two top diplomats paid special attention a solution for urgent humanitarian issues arisen as a result of the 44-Day War, primarily the return of detainees, the transfer of minefield maps and the preservation of cultural and religious heritage.

Reference was made to issues of easing tensions on the Armenian-Azerbaijani border, unblocking all transport and economic ties in the South Caucasus, creating a favorable atmosphere for regional cooperation.

The two foreign ministers emphasized the importance of continuing efforts aimed at a political and diplomatic settlement of border incidents between Armenia and Azerbaijan.

They touched upon aspects of Russian-Armenian cooperation, taking into account the upcoming bilateral meetings at various levels. They also touched on several international and regional concerns.

Karapents’ 'The Book of Adam' Released in English