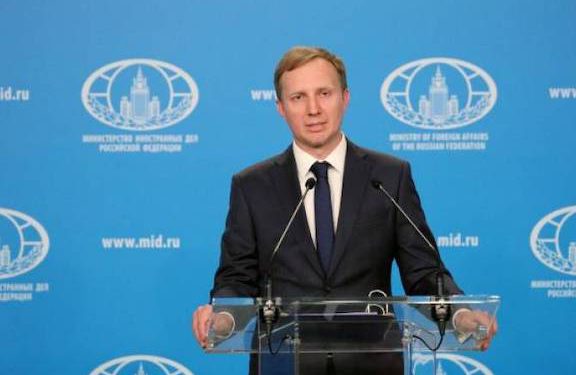 Confrontational rhetoric does not contribute to overcoming disagreements, Russia’s Foreign Ministry Spokesperson Alexei Zaytsev told reporters on Thursday, in an apparent rebuke of Azerbaijan’s President Ilham Aliyev, who has continuously threatened that Baku will open the so-called “Zangezur Corridor,” linking Azerbaijan proper with Nakhichevan through Armenia.

“Instead, it is extremely important to create opportunities for finding mutually acceptable solutions,’’ advised Zaytsev, adding that both Baku and Yerevan have expressed, at the highest level, their “readiness to open a new page in relations and a gradual normalization of relations.’’

Saying that Russia is proponent of “such positive approaches,” Zaytsev added that the working group tasked to address the unblocking of transport routes in the South Caucasus continues its efforts with the participation of the deputy prime ministers of Russia, Armenia and Azerbaijan.

“For our part, we welcome the positive attitude of Baku and Yerevan towards reaching mutually acceptable, package agreements, which in the future will give an opportunity to jointly advance toward a partnership,’’ said Zaytsev.

The foreign ministry official also said that Moscow is hopeful that a proposed visit by the OSCE Minsk Group co-chairs to the region will contribute to the organization of a meeting between the leaders of Armenia and Azerbaijan.

‘’Russia has always believed that constant dialogue, particularly at the highest level, contributes to the ensuring of mutual understanding and finding solutions to problematic issues in a constructive atmosphere,” said Zaytsev.

He also said that Russia is continuing to work with Yerevan and Baku to ensure the return of Armenian prisoners of war in exchange for maps of minefields, which he said will help normalize relations between the two countries.