Nazareth and Tamar Kevonian Donate $10,000 to Asbarez on 113th Anniversary 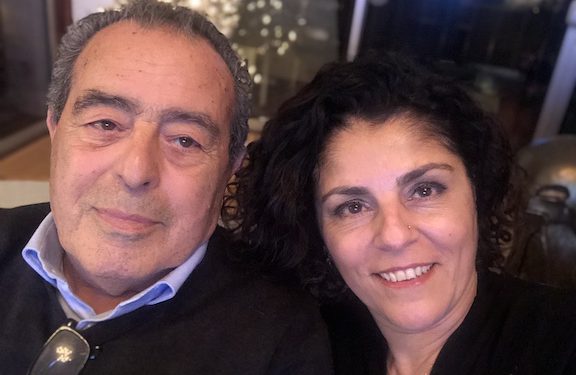 Nazareth Kevonian with his daughter, Tamar

Last week I received a phone call from one-time Asbarez columnist and regular contributor Tamar Kevonian, who was “checking in” to see how things have been progressing at Asbarez and to catch up on recent goings on in our community. We also discussed the enormous challenges facing Armenia and Artsakh in this post-war reality.

She also told me that she and her father, Nazareth Kevonian, would like to make their annual donation of $10,000 to Asbarez, which always coincides with our newspaper’s anniversary and our annual campaign.

During a subsequent phone call with Nazareth Kevonian he congratulated us and thanked Asbarez for its continued service to the community, saying that the advancement of the Armenian media was very important for him.

“For me it is important that Asbarez continues and prospers,” said Kevonian, reiterating his conviction for the importance of Asbarez’s mission and the critical role that the Armenian press plays in our every-day lives.

“I am doing my part so that the Armenian press continues to prosper and becomes an important part of our schools and the community in general,” Nazareth Kevonian told me. “I like and read Asbarez because it’s very comprehensive and I like the variety of the issues it covers.

Nazareth Kevonian is no stranger to Asbarez. His support for the newspaper goes back decades, when his daughter, Tamar, was a regular columnist for the newspaper’s English section, penning the weekly “People & Places” column.

Nazareth Kevonian also has a storied past in the Armenian community, having helmed the Land and Culture Organization for many years and seeing young Armenians going to Armenia where they worked to refurbish centuries-old churches and institutions. Kevonian believes that our cultural landmarks in Armenia are important reflections of our national heritage through which young Armenians can have a critical tie to the homeland.

Nazareth and Tamar Kevonian have also supported other organizations in the community, among them the Armenian Cultural Foundation, the Armenian National Committee of America—Western Region and the Western Prelacy.

On behalf of Asbarez, its staff and management, I would like to thank Nazareth and Tamar Kevonian for their continued support of our mission. We are humbled and grateful for their years of support, which enhances our efforts to serve the community. May they become an example to others to encourage and boost Asbarez.