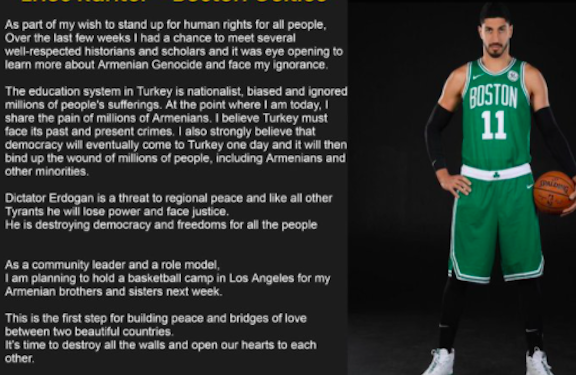 Urges Erdogan to face Turkey’s Past and Present Crimes

NBA Star Enes Kanter of the Boston Celtics, who is of Turkish origin, called on Turkish President Recep Tayyip Erdogan and all of Turkish society to reckon honestly with Turkey’s crimes – past and present.

“It’s time to destroy all the walls and start building peace and bridges of love between two beautiful countries,” said Kanter, who is of Turkish descent.

“As part of my wish to stand up for human rights for all people, over the last few weeks I had a chance to meet several well-respected historians and scholars and it was eye opening to learn more about e Armenian Genocide and face my ignorance,” Kanter said in a Twitter post on Sunday.

It’s time to destroy all the walls and
start building peace and bridges of love between two beautiful countries.❤️ pic.twitter.com/ei0unPCDL3

“The education System in Turkey is nationalist, biased and ignored millions of people’s sufferings. AT the point where I am today, I share the pain of millions of Armenians. I believe Turkey must face its past and present crimes. I also strongly believe that democracy will eventually come to Turkey one day and I will then bind up the wound of millions of people, including Armenians and other minorities,” the NBA star continued.

Kanter added that ” dictator Erdogan is a threat to regional peace and like of other tyrants he will lose power and face justice”.” “He is destroying democracy and freedoms for all the people,” Kanter added.

The player revealed plans to hold a basketball camp in Los Angeles “for Armenian brothers and sisters” next week.

“This is the first step for building peace and bridges of love between two beautiful countries. It’s time to destroy all the walls and open hearts to each other,” he concluded.

‘We are Ready to Teach Them Another Lesson.’ Aliyev Threatens War