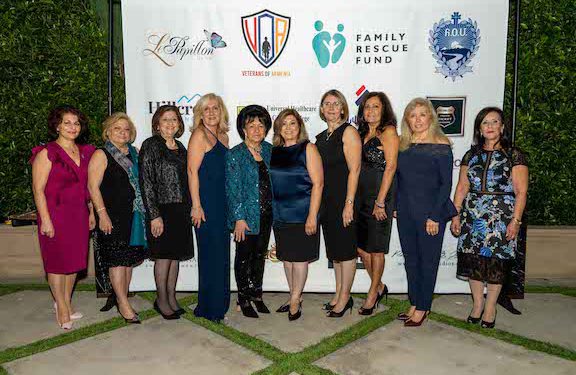 The Family Rescue Fund this year dedicated its annual event to those who defended the homeland and on Thursday, November 11—Veterans’ Day—in partnership with the Veterans of Armenia organization a fundraising event was held, during which nearly $500,000 was raised for a new Veterans Hospital in Armenia.

The goal for this event was to raise funds for the new Veterans’ Hospital in Armenia in support of the wounded soldiers of the Artsakh Wars.

As a result of the last war in 2020, approximately 11,000 soldiers received various injuries, and around 1,500 were recognized as permanently disabled. It has been identified that a specialized hospital for these veterans is urgently needed to provide a comprehensive care. Initiated by the Zinvori Tun Rehabilitation Center, The Veterans’ Hospital is set to be built in Armenia.

The event, held at the Grand Venue Banquet Hall in Los Angeles, brought together hundreds of Armenians from a wide variety of backgrounds, professions, and occupations to support a common cause and continue the long journey of providing for the well-being of our homeland and our people.

The night was heralded by an interactive program that included performances by both beloved and well-known artists, such as Armenchik, Arthur Khachents, Alina Aroustamian, Lilu, Aram Ayrumyan, Karo Ayrumyan, and Tata Simonyan. An auction featuring artwork created by veterans of the 44-Day Artsakh War with Armenian- themed rare collectibles, and paintings such as rugs from the Shushi Rug Factory.

The event was successful in raising $425,000 with pending donations for the new Veterans’ Hospital project by the Zinvori Tun NGO. As a cornerstone for future cooperation and philanthropy, the gala night embodied the organizers’ motto of “Unity” and “No Soldier Left Behind.”
About:

The Family Rescue Fund was established seven years ago to help improve the quality of life in Armenia by supporting underprivileged families through health, social and educational programs. Over the years, the organization was able to expand its commitments in supporting schools, churches, and hospitals.

After the Artsakh war, the Founding Members of the organization made it a priority to deliver immediate aid to our wounded soldiers. FRF focused most of its efforts on restoring the health of the defenders of our homeland. To date, through tireless efforts of FRF and partnerships in

Armenia, hundreds of wounded soldiers have recovered and received social and educational assistance. In cooperation with the Soldier House Rehabilitation Center, an intensive care department was opened in Armenia for soldiers with life threatening injuries.

The Veterans of Armenia is a 501(c)3 non-profit organization formed by a group of friends seeking to enable everyone around the world to create meaningful impacts in the motherland. The mission of their organization is to support veterans and their families. This includes assisting the veterans with reacclimating to civilian life by combating PTSD, providing physical therapy, and building an adaptive environment to secure and preserve their dignity and independence. Their motto is “No Soldier Left Behind,” and 100 percent of all donations from the community are directed toward impacting the lives of our veterans and soldiers. All administrative costs are paid for by the members.