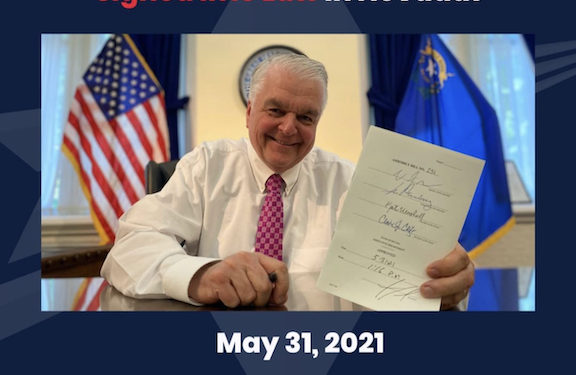 CARSON CITY, Nevada—A bill strengthening and mandating Holocaust and Armenian Genocide education in Nevada, which passed both houses of the state legislature with unanimous support, was signed into law by Nevada Governor Sisolak on May 31. Assembly Bill (AB) 231’s passing is timely with U.S. President Joe Biden’s unprecedented acknowledgement, affirmation and unequivocal use of the term “Armenian Genocide” after the 2019 passage by the U.S. Congress.

AB 231 is a bipartisan piece of legislation sponsored by Assemblywoman Lesley Cohen and Lisa Krasner and supported by Lieutenant Governor Kate Marshall. Armenian National Committee of America Nevada Co-Chair Lenna Hovanessian, Esq. spearheaded the bill with the Israeli-American Civic Action Network (ICAN) and the sponsorship of Lt. Governor Marshall, a strong proponent for inclusion of the Armenian Genocide, with relentless advocacy by Hovanessian, local and regional, ANCA, and the Nevada Armenian-American community.

“Education about the Armenian Genocide is central to the Armenian community’s identity and teaching about the Genocide in a historically accurate way in Nevada’s high school classrooms through this legislation ensures that our history will not be forgotten. Through this legislation we will combat denialism, hate and bigotry by raising a generation of global citizens in Nevada who are aware of the world around them,” remarked Hovanessian.

“In the context of the last 106 years since the Armenian Genocide and the 2020 genocidal War on Artsakh by Azerbaijan and Turkey- the self-proclaimed ‘one nation, two states’ – and recent invasion into Armenia’s borders, it is imperative to educate the next generation of students who will be leaders to understand history and empower them with accurate, comprehensive and worldly knowledge to promote zero-tolerance for hate and bigotry,” concluded Hovanessian.

The new law establishes an education committee within the Nevada Department of Education to evaluate curriculum standards, inventory classroom materials, and assess instructor training needs. In addition to education relating to the Holocaust, the bill also includes teaching of the Armenian Genocide, as well as Cambodian, Darfur, Guatemalan, and Rwandan genocides.

A coalition of Nevada organizations including ANCA-Nevada, local Anti-Defamation League, ICAN, and Jewish Nevada partnered to bring and advocate for this important legislation. Additional support for the bill was provided by ANCA Western Region Director Armen Sahakyan and Community Outreach Director Simon Maghakyan, as well as by the Genocide Education Project’s Director Roxanne Makasdjian and Honorary Consul Adroushan Armenian of Nevada.