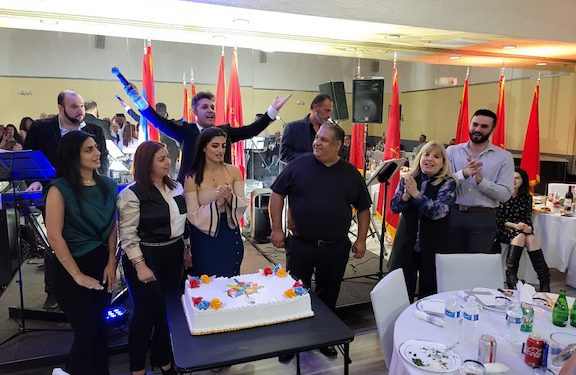 A commitment ceremony was held on Friday, June 11 at Krikor and Mariam Karamanoukian Glendale Youth Center, where six novices, having completed an educational program, joined the ranks of the Armenian Revolutionary Federation.

The ceremony began with ARF Western U.S. Education committee member Lusine Harutyunyan introducing the the novitiates inviting long-time ARF member and the director of the Pilvajian Pre-School Vehik Gabrielian to officiated the ceremony.

In her remarks, Gabrielian expressed hope that the new members will take lessons from the selfless sacrifice of ARF founders Kristapor, Rosdom and Zavarian always remembering to demonstrate the will, the intelligence and a conscience, all of which embody the moral, human and national aspects of an ARF member.

Gabrielian then referred to a portion of the ARF Program, which states: “The Armenian Revolutionary Federation believes that the ideal of socialism cannot be realized without democracy and democracy lacks and become limited without socialism.” Hence, she said, the concepts of democracy and socialism must become assimilated.

She referred to the current difficult situation facing the homeland and added that as new ARF members “you have the responsibility to be and work with an open mind, be discerning and balanced.”

Gabrielian told the new members to not blindly follow and exercise their rights to raise questions about aspects that they might believe do not correspond with the ARF’s principles and by-laws. She explained that the ARF’s organizational success has hinged on every member’s right to a voice and vote, as well as its decentralized structure.

Our aim and responsibility must be to advance the strengthening of our homeland and state at all costs, in order to realize the will and aspirations of the Armenian people,” said Gabrielian who also quoted President John F. Kennedy, who had said “Ask not what your country can do for you, but what you can do for your country.”

ARF Western U.S. Central Committee chair Dr. Carmen Ohanian welcomed the new members, adding that during the novitiate program they were introduced to the ARF’s ideology and learned that the organization’s—and the ARF member’s—sole purpose was in service to the Armenian people and the Armenian Nation.

Following the ceremony, the ARF Western U.S. Central Committee hosted a gathering to celebrate the new members attended by ARF members from various chapters of the region as well as the new members’ families and friends.