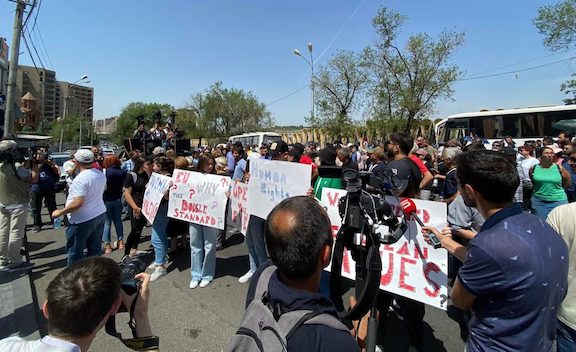 YEREVAN (Azatutyun.am)—Opposition leaders accused the European Union of turning a blind eye to what they see as Armenian government efforts to control the judiciary and stifle dissent as they again rallied supporters outside the EU Delegation in Yerevan on Monday.

They singled out the EU’s failure to publicly react to a scandal that led to the resignation late last week of Gagik Jhangiryan, a controversial former prosecutor who had headed Armenia’s judicial watchdog since April 2021.

Jhangiryan stepped down following the release of secretly recorded audio in which he appeared to blackmail Ruben Vartazaryan, the previous chairman of the Supreme Judicial Council (SJC) who fell out with Prime Minister Nikol Pashinyan.

Critics of Pashinyan’s administration have portrayed the recording as further proof that Jhangiryan was installed as acting head of the SJC to increase government influence on courts. They say his leadership of the powerful state body made mockery of judicial reforms declared by the Armenian government and backed by the EU.

Some of the protesters who marched to the EU Delegation building held a big photograph of the delegation head, Andrea Wiktorin, sitting next to Jhangiryan at a an international conference on those reforms held in Yerevan last month.

“For almost one and a half years, that man [Jhangiryan] carried out all judicial reforms and was behind all arrests [of opposition members and supporters,]” said Aram Vartevanyan, one of the opposition figures leading the crowd. “Doesn’t the EU ambassador have anything to say? Doesn’t the EU ambassador want to say whether this was the kind of reform that she imagined? If not, she shares responsibility for all of Gagik Jhangiryan’s deeds.”

“They are turning a blind eye to all illegal practices, political persecutions and attacks on courts,” charged Gegham Manukyan, another lawmaker representing the main opposition Hayastan alliance.
The EU mission did not immediately react to what was the second opposition demonstration held outside its offices in a month.

The opposition staged the previous protest on June 7 to deplore the EU’s failure to condemn Armenian security forces for using what it regards as excessive force against protesters demanding Pashinyan’s resignation.

Wiktorin said in May that riot police should not be allowed to “operate with impunity.” She also stressed: “There can be different perceptions of what peaceful gatherings are, and if there are provocations I would personally ask myself where does it end.”

The U.S. ambassador to Armenia, Lynne Tracy, also expressed concern over the use of force against protesters in Yerevan. Still, Tracy angered the opposition when she effectively welcomed on May 18 the outcome of last year’s parliamentary elections won by Pashinyan’s party.

Vartevanyan was asked by journalists on June 7 why the opposition does not voice similar criticism of Russia, which has not publicly commented on the Armenian authorities’ response to the protests. He argued that unlike the Western powers, Moscow does not portray Armenia as a democracy or claim to promote democratic reforms in the country.

Both Tracy and Wiktorin addressed on May 20 a “forum for democracy” in Yerevan attended by Pashinyan and other senior government officials. Opposition representatives were not allowed to participate in the event.