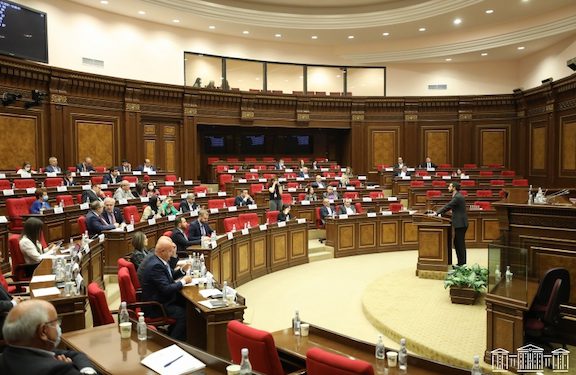 YEREVAN (Azatutyun.am)—Opposition lawmakers continued to push on Tuesday for an urgent session of the Armenian parliament on serious disruptions in Armenia’s trade with neighboring Iran resulting from a roadblock set up by Azerbaijan last month.

The opposition Hayastan and Pativ Unem blocs demanded such a discussion immediately after Azerbaijani authorities began levying hefty duties from Iranian vehicles passing through an Azerbaijani-controlled section of the main highway connecting Armenia and Iran.

Parliament speaker Alen Simonyan accepted the demand, saying that Armenia’s defense minister, National Security Service (NSS) and other officials will soon brief the National Assembly on Yerevan’s response to Baku’s actions. The discussion has still not taken place, however.

Representatives of the two parliamentary opposition forces reminded the pro-government majority of Simonian’s promise as the parliament was about to discuss other matters on Tuesday morning. They said transport links with Iran are vital for Armenia’s national security.

Deputy speaker Ruben Rubinyan, who presided over the session, countered that Simonyan is currently visiting Russia and urged the opposition to wait until he returns to Armenia.

Pashinyan said at the time that the road section is located on the Azerbaijani side of Armenia’s Soviet-era border with Azerbaijan, a claim disputed by his political opponents. He has also claimed that Armenia’s former leaders challenging him now themselves recognized that border with a law enacted in 2010.

The Azerbaijani roadblock and its resulting negative impact on cargo traffic between Armenia and Iran was high on the agenda of talks held by the foreign ministers of the two states in Tehran on Monday.
Armenia’s Ararat Mirzoyan briefed his Iranian counterpart Hossein Amir-Abdollahian on the ongoing reconstruction of an alternative road in Syunik that will allow Iranian trucks to bypass the Azerbaijani checkpoint. He said it will be completed soon.

Amir-Abdollahian seemed satisfied with these assurances when he spoke at a joint news briefing held after the talks.