Opposition Lawmakers Accuse Authorities of Covering Up Assault in Parliament 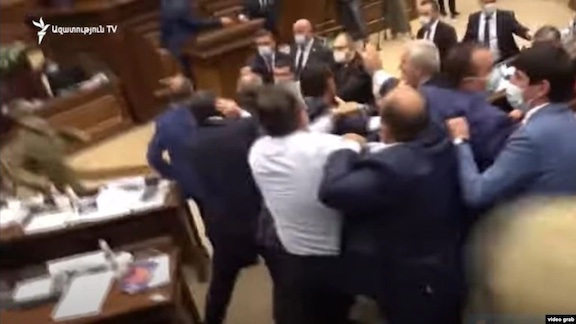 For the second consecutive day, Armenian lawmakers brawled in parliament on Aug. 25

The violence broke out on August 25 when a senior Hayastan member, Vahe Hakobyan, criticized the government’s five-year policy program during a heated session of the National Assembly attended by Prime Minister Nikol Pashinyan.

Hakobyan interrupted his speech before being approached by three deputies from Pashinyan’s Civil Contract party and kicked by one of them.

Hakobyan and five other Hayastan parliamentarians, including deputy speaker Ishkhan Saghatelian, were hit by a larger number of Civil Contract lawmakers in an ensuing melee that was not swiftly stopped by scores of security personnel present in the chamber. One of the opposition lawmakers, Gegham Nazarian, suffered an eye injury and required medical aid.

The Special Investigative Service (SIS) pledged to look into the ugly scenes filmed by various media outlets and questioned a number of deputies in the following days. It said on Tuesday that it will launch a formal criminal investigation into the beating of only one Hayastan deputy, Gegham Manukyan.

One of the video clips circulated on the Internet shows that Manukyan was assaulted by Hayk Sargsyan, a controversial Civil Contract member. The SIS said on Wednesday nobody has been charged in connection with that that assault yet.

A senior Hayastan figure, Artsvik Minasyan, condemned the SIS’s decision, saying that the law-enforcement agency is carrying out a “political order.” He said that is further proof that Armenia’s political leadership orchestrated the violence to bully the opposition and create an atmosphere of impunity in the country.

Daniel Ioannisyan of the Yerevan-based Union of Informed Citizens also criticized the SIS’s stance. He said his Western-funded civic group, which has closely examined the August 25 violence, will likely complain to the Office of the Prosecutor-General.

In a detailed analysis and a video clip posted on his Facebook page last week, Ioannisyan named nine pro-government lawmakers involved in the violence and even counted the number of punches thrown by each of them.

“It is evident to any sensible person that a number of deputies … carried out actions banned by the Criminal Code in front of the whole country,” Ioannisyan told RFE/RL’s Armenian Service. “Failure to prosecute them would send the public a message to effect that one can solve political issues by force and get away with that.”

The civic activist also emphasized the fact uniformed security officers waited for about a minute before stepping in to stop the brawl. He said they acted far more quickly when a less serious scuffle broke out on the parliament floor earlier on August 25 after Hayastan’s parliamentary leader, Seyran Ohanian, threw a plastic bottle at Civil Contract’s Sargsyan.

“The actions of the State Protection Service on that day … show that its officers present in the chamber at that point were carrying out a political order or satisfying the ruling team’s political wishes,” charged Ioannisyan.

Civil Contract’s Artur Hovannisian, one of the pro-government parliamentarians who punched vice-speaker Saghatelyan, defended the SIS’s decision. Hovannisian also blamed the opposition bloc — and Ohanian in particular — for the violence.