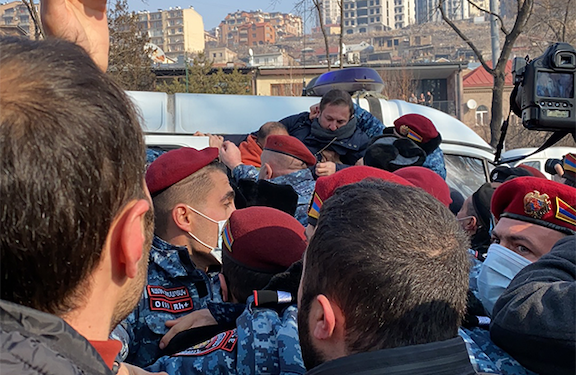 The National Salvation Movement staged another demonstration in front of Armenia’s parliament complex on Tuesday protesting a number of bills being debated in parliament that would drastically alter the country’s judiciary in favor of the ruling My Step bloc.

“Remember the changes the government was enacting around this time last year,” said Armenian Revolutionary Federation member and head of the news division of Yerkir Media Gegham Manukyan. “While ignoring all the problems in the country, they wanted to form a Constitutional Court that was to their liking. And now they are doing the same thing: ignoring all the problems, they are busy with something else. That is why this protest is taking place․”

In an emergency session that began at around 11 a.m. local time and lasted to the evening hours, the Armenian parliament’s ruling My Step faction unilaterally voted to alter the make up of Armenia’s courts, by deciding to appoint judges who they claimed would be neutral. The parliamentary opposition took part in the debate but voted against the measures.

Some of the protesters also complained about the recent rhetoric by My Step faction lawmakers, which they likened to “pro-Azerbaijani” statements.

Kristine Vardanyan, a member of the ARF Youth Organization of Armenia Central Executive, said that she and other supporters of the National Salvation Movement wanted to strip those lawmakers who have made recent statements that call into question the Armenian origins of Shushi and Hadrut.

The parliament building was surrounded by a large number of police and other law enforcement officials.

The protesters marched to Republic Square, where they were also met by a large number of law enforcement, including officers of the special services.

Saghatelyan told 168.am that no specific changes to approach were discussed during the meeting with the two former presidents, adding the the National Salvation Movement plans to continue its protests and civil disobedience actions.

“We are going to continue out efforts with more vigor until we oust this evil—the government,” Saghatelyan told 168.am.

The ARF Supreme Council of Armenia chairman said that his party will take part in snap parliamentary elections only after Prime Minister Nikol Pashinyan’s resignation and the installing of a temporary national accord government.

“No one is opposed to snap elections, but they cannot take place while Pashinyan is prime minister,” explained Saghatelyan, who also denied any suggestion that there were tensions among opposition forces making up the National Salvation Movement.

Kocharian and Vanetsyan have indicated that their parties would take part in snap elections called by Pashinyan, while Sarkisian has said his Republican Party of Armenia would boycott such elections.