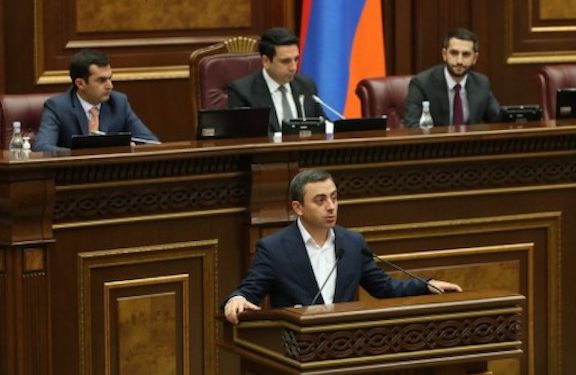 YEREVAN (Azatutyun.am)—Opposition lawmakers said on Friday that they will not accept hefty holiday bonuses allocated to all members and staffers of Armenia’s parliament by speaker Alen Simonyan.

Simonian decided to reward them on the occasion of the country’s Independence Day that will be marked on September 21. The one-off payments will be equivalent to 75 percent of the parliament deputies’ monthly wages, meaning that each of them will get at least 380,000 drams ($770).

Both opposition alliances represented in the National Assembly criticized the decision as profligate and unethical, saying that the Armenian authorities are continuing to neglect the country’s socioeconomic problems aggravated by last year’s war in Nagorno-Karabakh.

“At a time when the country has severe socioeconomic problems and more than 10,000 wounded and disabled persons, public officials, including National Assembly deputies, are continuing to get bonuses,” said Ishkhan Saghatelyan, a deputy parliament speaker and senior member of the opposition Hayastan bloc.

“In line with our campaign platform and statements, we will not benefit from these sums,” Saghatelyan told reporters. “We will either return them to the state budget or use them for implementing a [charity] project in of Armenia’s border regions.”

The opposition Pativ Unem bloc likewise said that all of its seven parliamentarians will donate their bonuses to victims of the Karabakh war and their families. In a statement, it said accepting the money means “living a normal life as if nothing happened” to Armenia and Karabakh.

The parliamentary group of Prime Minister Nikol Pashinyan’s Civil Contract party did not officially react to the opposition criticism.

One of its members, Hovik Aghazaryan, praised his opposition colleagues for planning to use their bonuses for charitable purposes. But Aghazaryan made clear that he himself will take the extra cash.

Another pro-government parliamentarian, Heriknaz Tigranyan, said there is nothing wrong with accepting what she described as a “symbolic reward” worth roughly twice the amount of the average monthly wage in Armenia.

Armenia’s previous parliament also controlled by Pashinyan’s party faced similar criticism earlier this year when it decided to add 250,000 drams to its deputies’ monthly wages worth at least 473,000 drams. The extra sum was supposed to cover their job expenses.