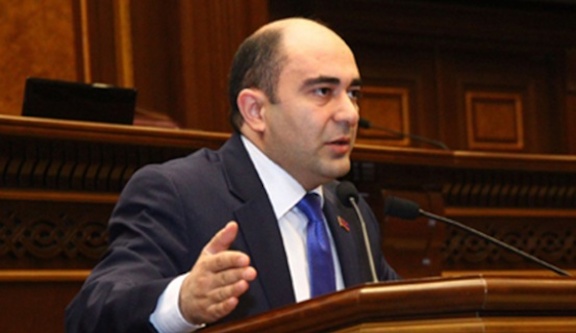 YEREVAN (Azatutyun.am)—One of the two opposition parties represented in Armenia’s parliament on Monday denounced the authorities for seemingly abandoning plans to hold fresh parliamentary elections and said they will only radicalize their political foes and other critics.

Edmon Marukyan, the leader of the Bright Armenia Party, warned of more public calls for a violent overthrow of Prime Minister Nikol Pashinyan and his government.

“Of course, this is not Bright Armenia’s [preferred] path,” he said. “But that accumulated [anti-government] energy will burst somewhere and the authorities will be primarily responsible for that.”

The Bright Armenia Party is not part of an alliance of 17 opposition parties that launched anti-government protests immediately after the Russian-brokered ceasefire that stopped the war in Nagorno-Karabakh on November 10. But it too demanded Pashinyan’s resignation over his handling of the war.

Pashinyan rejected the opposition demands but expressed readiness in late December to hold snap elections in the coming months. Opposition forces have since continued to insist that they must be held by a new and interim government.

In a weekend statement, Pashinyan and his My Step bloc said they see no need for snap polls because of the opposition’s stance and what described as a lack of popular “demand” for the parliament’s dissolution.

“They have decided not to hold elections,” said Marukyan. He claimed that Pashinyan changed his mind after realizing that he cannot win reelection.

A senior member of Prosperous Armenia Party, the other parliamentary opposition force, insisted, for her part, that Pashinyan was never serious about holding fresh elections.

“The conscious, thinking and patriotic part of the society concerned about the country’s future — and they are a majority — is demanding that Nikol Pashinyan resign as soon as possible,” Naira Zohrabian told RFE/RL’s Armenian Service.

“Nikol Pashinyan cannot be one of the few leaders in world history who stayed in power after surrendering lands,” she said.

“A vast part of the population is demanding that we do not opt for elections and keep doing our job instead,” one of them Hayk Konjoryan told RFE/RL’s Armenian Service.

“If the vast majority of our people wanted us to hold pre-term elections … then citizens would organize themselves without the 17 [opposition] forces or present their demand to us together with other political forces,” said Konjoryan. He said they would specifically take to the streets.

Reacting to My Step’s statement, the Homeland Salvation Movement coordinator, Ishkhan Saghatelyan, announced on Monday that the first rally will be held in Yerevan’s Liberty Square on February 20. “Those citizens who thought about getting rid of the government of evil through elections will now take to the streets,” he wrote on Facebook.