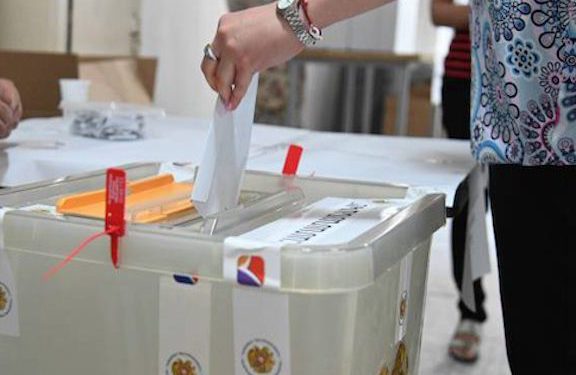 Local government elections were held on Oct. 17 in nine areas in Armenia

Voters also went to the polls in seven other communities across the country. In most of them, they elected, on a party-list basis, local councils that will in turn appoint their mayors.

The most tense and closely watched race was in the Syunik town of Goris and several surrounding villages making up a single administrative unit. Its incumbent mayor, Arush Arushanyan, was arrested in July on a string of criminal charges rejected by him as politically motivated. Arushanyan’s two deputies were detained in August but were subsequently set free.

Arushanyan, who has headed the community since 2017, has not been convicted of any crimes so far and was therefore allowed to run for reelection. The 30-year-old is affiliated with the main opposition Hayastan alliance led by former President Robert Kocharian. But he chose to cobble together a smaller bloc for the local election.

“I didn’t expect such an outcome because during the election campaign we were convinced that we are going to win,” Abunts told journalists late in the evening.

Sunday’s voting was marked by mutual accusations of foul play and heightened police presence in Goris condemned by the Arush Arushanyan Bloc as a government attempt to intimidate its supporters.

Special police forces sent from Yerevan also raided the bloc’s campaign headquarters and searched it for several hours. A lawyer for the bloc said they suspect the incumbent mayor’s father and campaign manager, Gagik Arushanyan, of buying votes. He rejected the allegations.

Over two dozen Arushanyan loyalists, who gathered in the office after the closure of polls, burst with joy when Menua Hovsepian, a deputy mayor of Goris released from jail last week, announced the preliminary vote results.

“The people of Goris have spoken up [in favor of] dignity, Syunik and the country,” said Hovsepian.
The new Goris council will almost certainly reelect Arushanyan as community head. It remains to be seen whether Armenian courts will agree to free him pending the outcome of his anticipated trial.

Syunik borders districts southwest of Nagorno-Karabakh that were retaken by Azerbaijan during and shortly after the six-week war stopped by a Russian-brokered ceasefire last November. The mayors of virtually all provincial towns and villages blamed Pashinyan for Armenia’s defeat and demanded his resignation. Some of them encouraged supporters to disrupt Pashinyan’s visits to Syunik.

Most Syunik mayors joined Kocharian’s bloc in the run-up to the snap parliamentary elections won by Civil Contract. Three of them were arrested shortly after the snap polls.

One of those mayors, Mkhitar Zakaryan, ran another major community comprising the towns of Meghri and Agarak and several villages. Pashinyan’s party was defeated there on Sunday by the Republican Party, a pro-Western group which is nominally in opposition to the Armenian government but supports it on some issues.

The ruling party prevailed in two other, smaller and rural Syunik communities. But it suffered another serious setback in Gyumri.

Armenia’s second largest city has been run by Samvel Balasanyan, a local businessman, for the last nine years. He was allied to the former Armenian government that helped him win reelection in 2016.

Although Balasantan decided not to seek another term in office, a newly created party bearing his name has joined the mayoral race. Its list of election candidates was topped by one of the outgoing mayor’s relatives, Vardges Sanosyan.

The Balasanyan Bloc won 36.6 percent of the vote in the weekend election marked by a record-lower voter turnout of just over 24 percent. Civil Contract finished second with about 30 percent. Three other political forces, including former President Serzh Sarkisian’s Republican Party, fared much worse while managing to clear the 4 percent threshold for being represented in the municipal council.

It was not immediately clear if the Balasanyan Bloc will seek a power-sharing deal with Pashinyan’s party or the other opposition groups to install Gyumri’s next mayor.