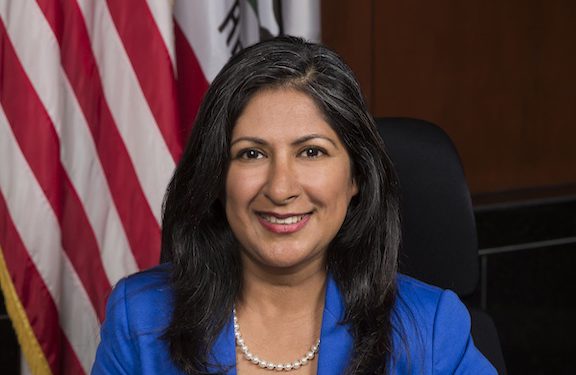 Irvine Mayor Farrah Khan is a staunch supporter of Azerbaijan

BY ARDY KASSAKHIAN AND LEONARD MANOUKIAN

The last two years have been a time of reckoning for Americans as we reflect on our nation’s past. From racism and xenophobia to sexism and homophobia, the American consciousness has been woken by protests, counter protests and some of the most polarizing political discourse in our nation since the Civil War.  Through it all, there have been positive steps such as discussions about what is appropriate and inappropriate to glorify.  As a result, many cities have rightfully taken down statues of Confederate figures that represented a rebellion based on the idea of maintaining the abhorrent institution of slavery.  Activists and leaders in the Democratic Party have often praised these efforts and have condemned those who advocate for the preservation of these symbols of an antebellum era.

But principles are only as strong as the tests they can withstand.  So why fight for human rights and give a pass or turn a blind eye to individuals who exalt despots who violate these rights in other parts of the world?  Orange County’s Democratic Party is faced with this dilemma as it prepares to honor Irvine Mayor Farrah Khan at an upcoming Democratic Party awards event on October 23.  Khan is on record praising Azerbaijan and its regime and has visited the country on the government’s dime.    Khan’s accomplishment as the first Muslim female Mayor of a major city in the U.S. has kept some from stepping up and rightfully criticizing her actions and words.  During her campaign, her questionable ties to one of the most corrupt and violently oppressive regimes in the world was never brought into question by any of her supporters. Khan has not shied away from being an unabashed supporter of Azerbaijan and its billionaire petro-dictator Ilham Aliyev, even praising the nation in a recent Mayoral message.

Azerbaijan is a nation most have not heard of unless, the powers in Baku (Azerbaijan’s capital) tap you on the shoulder to be one of their shills in the West – like they have with Khan. Just last year, Azerbaijan launched an unprovoked attack on the people of the Republic of Artsakh – a small autonomous region which is ethnically Armenian but had been placed under Azeri rule during Soviet times under Joseph Stalin’s regime.  In the final days of the Soviet Union, the people of Artsakh held a referendum vote in which the overwhelming majority voted for independence under the same rules that allowed the remainder of the Soviet Republics to break away from the USSR under much fanfare from the West.  Unfortunately, the Armenian efforts for self-determination were met with pogroms and massacres in cities of Baku and Sumgait and soon after flared up into one of the longest armed conflicts in the post-Soviet era.  Last year’s attack was the most recent violation of a tenuous ceasefire dating back to 1994.  During this recent attack, Azerbaijan brought in over 1000 ISIS mercenaries from Syria to attack and terrorize civilians.  After the end of the armed conflict in which Armenia lost over 4000 men in a span of 44 days under a barrage of drone attacks aided by Turkish special forces, the Azeri government took over 200 military and civilian personnel captive and continues to hold them in conditions that human rights groups have condemned.  Congress has passed resolutions calling on Azerbaijan to release all prisoners and to resume peace talks. The California Democratic Party has passed a similar resolution condemning Azerbaijan. But Ilham Aliyev is very adept at using his oil riches to buy influence in the right places. Just look up the scandal of bribery of officials in Germany and other countries in the EU or the recent BBC Pandora’s leak of financial documents that shows how the Aliyev’s have laundered hundreds of millions of dollars in the UK alone.

So what does a conflict half a world away in a former Soviet Republic and its neighbors have to do with the  Democratic Party of Orange County?  Everything.

Armenians have been dispersed into a global diaspora because of centuries of ethnic cleansing and genocide perpetrated by the Turkish people of the region (including Azerbaijan which denies the Genocide to this day).  The recent war was nothing less than a continuation of this effort to eradicate the indigenous Armenian population from its last foothold in its ancestral homelands.  The ease by which this was done was fueled by an oil rich corrupt government that counters every basic value and ideal that we as Americans hold dear.  So why give someone a pass for praising such a regime when we would not tolerate the same for someone who praised Nazi Germany or PolPot’s Cambodia or the Confederacy?  Why shirk away from our hard fought positions over the last two years simply because we didn’t know or because the issue “seems complicated”?

Well, if you’ve read this far, now you know.  And if you still support the Democratic party honoring Mayor Khan, then you’re complicit in the suffering of innocent people and the politics of petro-dictatorships.  Because the worst thing you can do when protesting for human rights is ignoring the fact that you place your own boot on someone else’s throat to do so.  The Democratic Party of Orange County should do the right thing and rescind their award of Mayor Khan until she has publicly apologized for her statements and denounced the government of Azerbaijan’s human rights violations both in Azerbaijan  and against the people of Artsakh and Armenia.

Ardy Kassakhian is Glendale City Councilmember and a descendant of survivors of the Armenian Genocide.  He is a member and an appointed delegate of the California Democratic Party.  Kassakhian is also an adjunct instructor of Political Science.