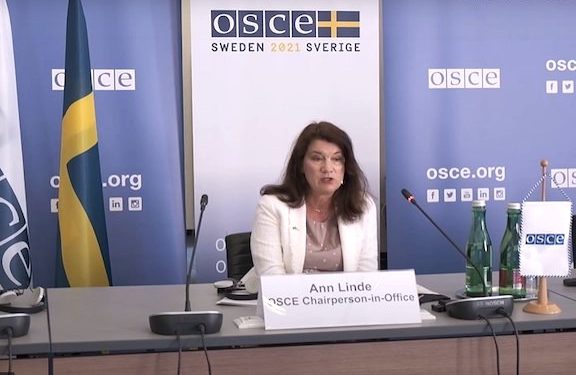 The OSCE Chairperson-in-Office, the Swedish Foreign Minister Ann Linde on Tuesday called for the release of all POWs and urged the resumption of high-level negotiations under the OSCE Minsk Group “to find a solution to all outstanding issues.”

“There is still no real peace agreement between the parties,” said Linde said at a joint press conference with OSCE Secretary General Helga Schmidt on Tuesday.

Linde also disagreed with the opinion that the OSCE has not been putting enough effort in the Karabakh conflict.

“I have a Special Representative, who is very active. I had a physical meeting with him to discuss the situation. We have co-chairmanship comprising the United States, Russia and France, who try to play a positive role even if they have not been able to enter the area for the last year, partly because of Covid and other reasons,” the Chairperson said.

She reminded that in mid-June there was an agreement to return 15 detainees to Armenia and hand over information to Azerbaijan that will help facilitate important de-mining work.

“I think it was a welcome confidence-building measure, and here was valuable role-play by Georgia, the United States, as well as excellent cooperation between the President of the European Council and our Swedish chairpersonship. I have urged Armenia and Azerbaijan to release all detainees and resume high level negotiations under the auspices of the OSCE Minsk Group to find a solution to all outstanding issues,” she stated.

Separately, Linde congratulated acting Prime Minister Nikol Pashinyan after his party received high vote during the June 20 parliamentary election. The OSCE Chairman-in-Office highlighted the fact that the OSCE / ODIHR and the OSCE PA carried out an observation mission during the elections.

“We expect to continue the cooperation with the Government of the Republic of Armenia. I also wish success in the implementation of the ongoing democratic reforms. Sweden is ready to support Armenia,” Linde wrote on Twitter.

Varant and Hoori Melkonian Donate $300,000 to ACF During Appreciation Event