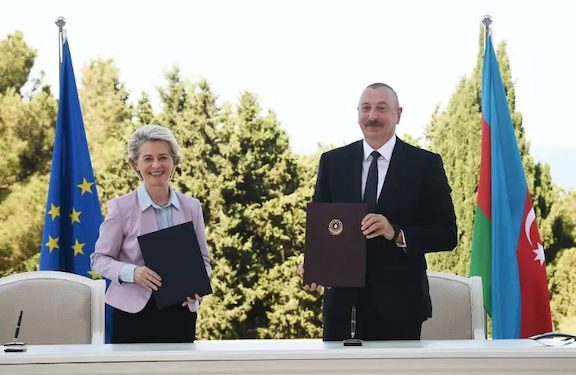 More than 60 French officials are urging the European Union to abandon a recently signed agreement to import gas from Azerbaijan, which they say would make Europe dependent on Azerbaijan for decades to come.

The appeal was presented in the form of a letter published in the prominent French daily newspaper, Le Monde, through the efforts of the Coordinating Council of Armenian Organizations of France (CCAF).

Earlier this month the European commission president, Ursula von der Leyen, hailed Azerbaijan as a “crucial” and “reliable” energy supplier, as she announced an agreement with Baku to expand the southern gas corridor, the 3,500km pipeline taking Caspian Sea gas to Europe.

Standing alongside Azerbaijan’s president, Ilham Aliyev, Von der Leyen said the EU was diversifying away from Russia and turning “towards more reliable, trustworthy partners”, adding she was glad to count Azerbaijan among them.

The signatories urge the European Commission to abandon the project of gas import from Azerbaijan and call on EU heads of state and governments, as well as the European Parliament not to ratify the agreement, which, they say, “would have the effect of replacing dependence on Russian gas with dependence on Azerbaijani gas.”

“The 44-Day War of fall 2020 illustrated Azerbaijan’s appalling intentions,” the French officials wrote, reminding that during the war Turkey recruited jihadists to help the Azerbaijani army in the war, and noting the use of phosphorus bombs prohibited because of the human and ecological disasters they can cause.

The French officials also emphasized the torture of prisoners of war held in Azerbaijani jails in disregard for international conventions.

They also warned that by choosing Azerbaijan as a gas supplier, European commission president Ursula von der Leyen is actually weakening the European Union and urge her to abandon the project.

Last week, prominent human rights groups, among them Human Rights Watch and Amnesty International, have criticized an EU deal to ramp up gas supplies from Azerbaijan, as Europe scrambles to secure non-Russian sources of energy, The Guardian reported.

Human Rights Watch said the EU should not have signed the memorandum, nor enter a mooted new bilateral agreement, without insisting on political reforms: the release of scores of political prisoners and changes to laws that heavily restrict non-governmental organizations and the media.

Azerbaijan uses oil and gas “to silence the EU on fundamental rights issues,” said Philippe Dam, acting EU director at Human Rights Watch. “The reality is that Azerbaijan authorities have been famous for cracking down on civil society activists investigating corruption, especially when it comes to oil and gas.”
“The EU should not say a country is reliable when it is restricting the activities of civil society groups and crushing political dissent,” Dam said.

Other campaigners accused the EU of undermining its climate goals, while enriching autocrats. “It is extraordinary that the EU seems intent on not learning from its current predicament, and is pushing to build more pipelines which would lock us into gas in the long term,” said Barnaby Pace, a senior gas campaigner at Global Witness. “A rapid boost for renewable energy and home insulation should be the obvious answer to the crises Europe is staring at – and certainly not repeating the mistakes that have taken us to this point.”

Eve Geddie, director of Amnesty International’s Brussels office, said “repressive and unaccountable regimes are rarely reliable partners” and added that “privileging short-term objectives at the expense of human rights is a recipe for disaster.”