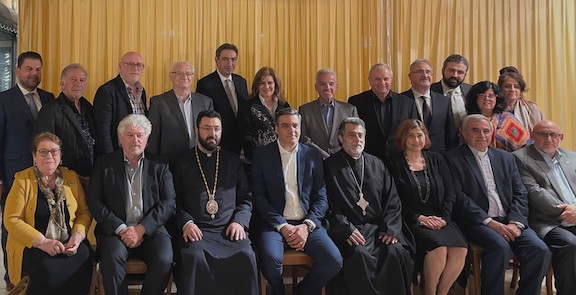 Armenia's Human Rights Defender Arman Tatoyan with members of the Pan-Armenian Council of the Western U.S.

During the meeting, Tatoyan presented the humanitarian crisis caused by Azerbaijan’s massive attack on the eastern border in the Syunik Province in an attempt to breach Armenia’s sovereign territory. He also outlined the human rights abuses committed by Azerbaijani Armed forces, discussed border security and the illegal deployment of Azerbaijani forces on the roads between the communities of Armenia which endanger people’s lives and well-being, and the unlawful detention of POWs. The meeting led to a constructive discussion on the role which Diaspora organizations and communities can play in helping to secure the future of the Armenian homeland.

Dr. Tatoyan has been invited to the United States by the Armenian National Committee of America-Western Region, a PAC-WUSA member organization, to engage with a number of community stakeholders, elected officials, academic circles, and other interested parties throughout California to discuss the latest developments in the region.

Arman Tatoyan obtained his LLM and Ph.D. from the Yerevan State University, Department of Criminal Procedure and Criminalistics. He holds a Master of Laws degree from the University of Pennsylvania Law School. In 2016, Tatoyan was elected as the Human Rights Defender (Ombudsman) of Armenia. He also serves as an Ad Hoc Judge in the European Court of Human Rights, a Permanent International Advisor at the Council of Europe’s Directorate General of Human Rights and Rule of Law, and lectures at the Yerevan State University, American University of Armenia, and the Academy of Justice of Armenia. He previously held positions in the Ministry of Justice of the Republic of Armenia (2013-2016) and the Deputy Representative (Deputy Agent) of the Government of Armenia before the European Court of Human Rights (2013-2016). He has also been involved in different working groups for drafting laws and strategies for Armenia.