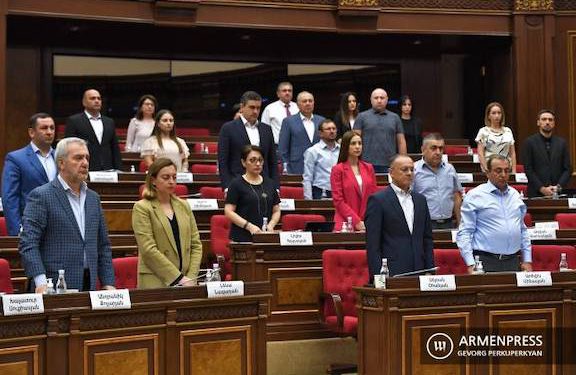 Armenian lawmakers observe a moment of silence on Aug. 17 in honor of two soldiers killed at the border on Monday

YEREAN (Azatutyun.am)—Representatives of two opposition factions in the Armenian parliament have raised their concerns over the current situation at the border with Azerbaijan where at least two Armenian soldiers were killed and one was wounded during the past two days.

The Armenian legislature convened for a special session on Tuesday to discuss a government-drafted bill on the use of additional water from Lake Sevan for irrigation purposes amid an unusually hot summer.

Representatives of the Hayastan and Pativ Unem factions, however, drew their pro-government colleagues’ attention to what they described as a “no less important issue” of fresh tensions at the Armenian-Azerbaijani border.

The new escalation in the border standoff between the Armenian and Azerbaijani military comes amid fresh claims by Azerbaijani President Ilham Aliyev about “historical Azeri lands” in the territory of modern-day Armenia that he made during his visit to the Kelbajar (Kalbajar) district this week.

Kelbajar was one of three districts around Nagorno-Karabakh that Armenian forces withdrew from after a Russian-brokered ceasefire deal put an end to six weeks of fighting between Armenia and Azerbaijan last fall.

During the hostilities in which nearly 7,000 people were killed Azerbaijan recaptured four other districts around Nagorno-Karabakh as well as two districts within the region proper.

Aliyev, in particular, referred to the Syunik and Gegharkunik provinces of Armenia, saying that Azerbaijanis who lived there in Soviet times and were displaced in the late 1980s are entitled to return and live in the “lands of their ancestors.” In his earlier statements Aliyev also described Yerevan, the capital of Armenia, as “a historical Azerbaijani land.”

The Syunik, Gegharkunik and Ararat regions bordering on Azerbaijan have been the locations of border fighting in recent days. Armenia and Azerbaijan have blamed each other for the escalation.

Seyran Ohanyan, the head of the opposition Hayastan faction, suggested that the current border situation should be discussed in parliament because “it is, first of all, necessary to dispel any fears that our people have, as our authorities seem to have stopped dealing with this situation.”

“Only the ombudsman provides relevant information to our society,” Ohanyan said, referring to reports by Human Rights Defender Arman Tatoyan about the situation of people in border areas.

Hayk Konkoryan, the head of the majority Civil Contract faction, said the faction did not address the opposition proposal when they held a closed-door discussion during the day.

Pro-government lawmakers did not comment on Ohanyan’s proposal or respond to Aliyev’s statements immediately. Senior Armenian officials have not responded to the Azerbaijani president’s recent statements either.

Ohanyan, who served as Armenia’s defense minister in 2008-2016, claimed that Azerbaijan takes official Yerevan’s silence as a sign of weakness and pushes forward. “Why don’t you condemn Azerbaijan? Why don’t you present to the international community that Azerbaijan is a criminal state that stages provocations?” the opposition leader charged.

Later on Tuesday Armenia’s Ministry of Foreign Affairs issued a statement condemning what it described as Azerbaijan’s “provocative actions” on the borders. It also noted that “these actions are accompanied by the threats of the Azerbaijani top leadership towards the sovereignty and territorial integrity of Armenia and use of force against Artsakh [the Armenian name for Nagorno-Karabakh].”

“We strongly condemn the provocative actions of the Azerbaijani side, which are clearly aimed at undermining the efforts towards de-escalation and hindering regional security and peace. They are aimed at preventing the resumption of the peace process under the auspices of the OSCE Minsk Group Co-Chairmanship, as well as disrupting the regional unblocking process and the opening of all means of communication,” the Armenian ministry said.

“The Republic of Armenia will consistently defend its sovereignty and territorial integrity, the right of the people of Artsakh to self-determination and life in their homeland,” it concluded.