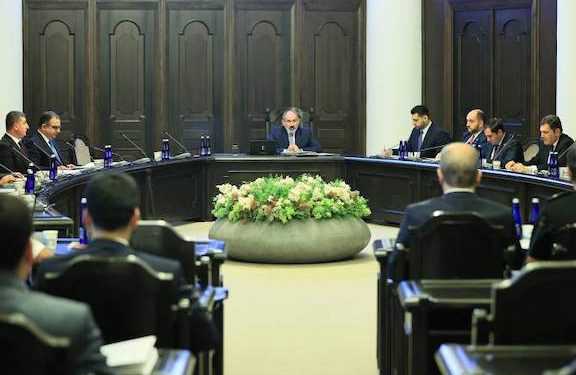 YEREVAN (Azatutyun.am)—Prime Minister Nikol Pashinyan on Thursday accused Azerbaijan of trying to walk away from the Russian-brokered ceasefire agreement that stopped the Armenian-Azerbaijani war over Nagorno-Karabakh in November 2020.

Speaking the day after two Karabakh Armenian soldiers were killed and 19 others wounded in fighting with Azerbaijani forces, Pashinyan also urged Russia to do more to prevent further ceasefire violations. He said that Baku has been stepping up such violations despite the presence of Russian peacekeeping troops in Karabakh.

“In these circumstances, it is becoming imperative to adjust details of the [Russian] peacekeeping operation in Nagorno-Karabakh,” Pashinyan told a weekly cabinet meeting in Yerevan.

“We expect that any attempt to cross the line of contact will be stopped by the peacekeeping troops of the Russian Federation,” he said.

The Russian Defense Ministry effectively blamed the Azerbaijani side for Wednesday’s hostilities in Karabakh that reportedly involved Azerbaijani drone attacks and mortar fire. Its peacekeeping contingent intervened to halt the fighting.

The Azerbaijani army admitted striking Karabakh Armenian positions as well as a military base. It claimed that the attacks were launched in retaliation for the killing of one of its soldiers. The authorities in Yerevan and Stepanakert insist that the Azerbaijani “aggression” was unprovoked.

“Azerbaijan’s recourse to the escalation serves one purpose: to scrap the regulations set by the [Russian-Armenian-Azerbaijani] statement of November 9, 2020,” charged Pashinyan. Baku, he said, is unwilling to recognize the current “line of contact” in Karabakh and the Lachin corridor connecting the disputed territory to Armenia.

The Azerbaijani Foreign Ministry insisted that Baku has fully complied with the terms of the agreement and expects the same from Yerevan. It claimed that Armenia has still not withdrawn its troops from Karabakh.

“There are no servicemen of the Republic of Armenia in Nagorno-Karabakh,” stressed Pashinyan.

The Armenian premier said that the latest armed incidents were sparked by Azerbaijani demands for the closure of the existing Lachin road and the opening of a new corridor connecting Armenia and Karabakh. He argued that the truce accord requires Russia, Azerbaijan and Armenia to work out before 2024 a joint “plan” for the construction of a new Armenia-Karabakh road. No such plan has been drawn up yet, he said.

The Azerbaijani Foreign Ministry said, however, that the three sides did agree on the “route” of the new corridor early this year and accused Yerevan of dragging out work on its Armenian sections.
Russia’s Security Council discussed the situation in the Karabakh conflict zone at a meeting chaired by President Vladimir Putin. According to Kremlin spokesman Dmitry Peskov, the council stressed “the urgent need to implement all provisions” of the Armenian-Azerbaijani ceasefire deal brokered by Putin.
In a statement, the Russian Foreign Ministry similarly urged all parties to respect the ceasefire and “show restraint.” It said that the Russian peacekeepers are “making every effort to stabilize the situation on the ground.”

“Active work with both sides is carried out through all channels and at all levels, including the country’s top leadership,” the statement said, adding that Foreign Minister Sergei Lavrov is “in close contact with his Azerbaijani and Armenian counterparts.”

The conflicting sides reported no further significant ceasefire violations in Karabakh as of Thursday afternoon. Speaking in the morning, Pashinyan said that although there are no “active hostilities” there now, the situation remains “extremely tense.”