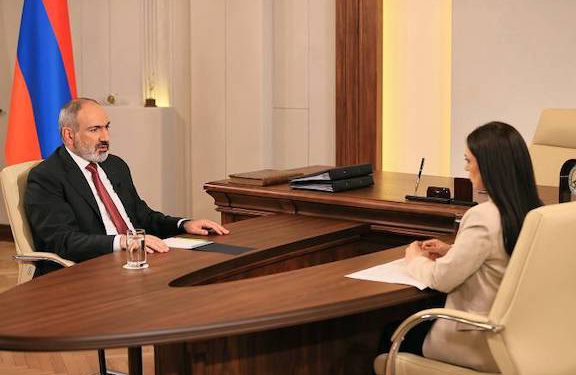 Prime Minister Nikol Pashinyan on Friday again downplayed Artsakh when he announced that the foreign ministers Armenia and Azerbaijan will meet in Geneva on Sunday to kick off what he called “substantive negotiations” on a so-called peace treaty.

Speaking to the Armenian Public Television channel on Friday, Pashinyan said that if acceptable results emerge from negotiations that Armenia “will sign it.”

He extensively spoke about the notion of mutual recognition of territorial integrity, once again reiterating that such a recognition should be based on a 1991 treaty that was signed when the Commonwealth of Independent States replaced the Soviet Union.

Azerbaijan, meanwhile, has insisted that Armenia must recognize Artsakh as party of its territory.

When Pashinyan was asked to elaborate he again reiterated that the territory of encompasses 29,800 square kilometers based on the 1991 document, which does not include Artsakh as part of Armenia—a far cry from his declaration in 2019 that “Artsakh is Armenia and that’s it.”

In a crass response that can be seen as him hitting back at Armenia’s opposition forces and the growing of number of detractors, Pashinyan doubled down.

“I am saying, the Republic of Armenia is 29,800 square kilometers in size. Why am I saying 29,800 square kilometers? Because that’s the internationally recognized borders of the Republic of Armenia. After saying this, why would anyone call me a traitor? Do they consider that Armenia’s territory is actually 300,000 square kilometers and we shouldn’t recognize any border as long as we haven’t reached 300,000 square kilometers? There are those who think like that in our country. Perhaps some would say, allow me to clarify, that this is abandoning the abandoning of the concept of Armenia spanning from sea to sea, and therefore treason. Are there people like that? Yes, there are. But we are saying the following, in our perception the basis of a peace treaty, and this is logical, must be the mutual recognition of territorial integrity by Armenia and Azerbaijan. And what are we saying, if Azerbaijan recognizes our territorial integrity which is based on the 1991 December 18 treaty on the CIS then we are ready, based on this, to go for a mutual recognition of territorial integrity,” Pashinyan said, adding that this concept is one of the components of the peace treaty.

When asked about Artsakh and its independence and self-determination, Pashinyan again repeated his earlier position, which angered and raised concerns with the Artsakh authorities, as well as the opposition.

He went one step further and said neither Moscow or Brussels or Washington are prepared to recognize Artsakh’s independence or it as part of Armenia.

“We can’t say that each of them has its own package, but they do have certain views. If I am obliged to speak with our people truthfully—and I am obliged to do so—I should have said this earlier, even before the war. None of the countries you mentioned is ready to recognize the independence of Karabakh and none of them is ready to recognize Karabakh as part of Armenia. We must face this fact,” Pashinyan insisted, adding that each of the countries referenced have already made statements which suggest that Karabakh is part of Azerbaijan.

He reiterated that only through peace there can be security.

“I am still convinced that only peace can ensure guaranteed security, meaning as long as we don’t have comprehensive peace we can’t talk about comprehensive security, and therefore all our efforts even during the most tense situations are aimed at peace,” said Pashinyan. “If we believe that the inviolability of borders must be defended including by our military’s efforts and diplomatic methods, the far-reaching goal of this action is again peace.”