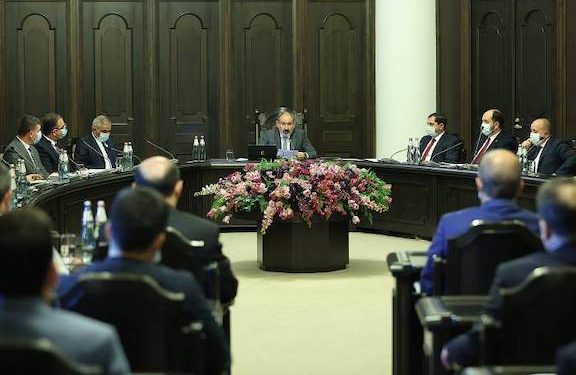 Prime Minister Nikol Pashinyan again told his cabinet on Sept. 8 he was encouraged by Turkey-Armenia normalization

Reopening of Armenia’s borders with Turkey and Azerbaijan was the focus of a briefing presented by Prime Minister Nikol Pashinyan on Wednesday during his cabinet meeting, before an official visit to Georgia, where he pushed his government “regional peace” agenda.

Pashinyan, again, said he was encouraged by statements made about normalizing Turkey-Armenia relations by President Recep Tayyip Erdogan of Turkey, who, in remarks last week, clearly laid out preconditions for such rapprochement, urging Armenia to recognize Azerbaijan’s territorial integrity. In the current state, that would mean recognizing Artsakh as being part of Azerbaijan.

“We see in these [Erdogan’s] statements as an opportunity to speak about the normalization of the Armenia-Turkey relations and re-launching the Armenian-Turkish railway and roads. And we are ready for such a conversation,” Pashinyan told the cabinet. “By and large this is about transforming our region into a crossroads linking the West with East and North with South.”

Pashinyan cited recent statements by Russia’s top leaders, including its foreign minister, Sergei Lavrov, to justify his dash toward opening borders with Turkey, which only a year ago was actively aiding and abetting Azerbaijan’s aggressive attack on Artsakh.

The Armenian prime minister said that just as Russia has publicly expressed willing to support the normalization of Turkey-Armenia relations, “the European Union, France and the United States are also interested in this process. While China and India’s eagerness in the direction of developing communication projects is well known.”

By invoking his government’s “peace and stability” agenda, Pashinyan said that it was up to Armenia to resolve these issues.

“Peace, stability, cooperation are desirable goals and concepts that are easy to advocate, but their implementation requires reasonable, carefully thought out, pragmatic efforts. And the Republic of Armenia is ready to make such efforts,” Pashinyan said.

Since signing the November 9 agreement, which saw the forced surrender of territories in Artsakh and Armenia to Azerbaijan, Pashinyan has often touted the idea of opening of borders with Azerbaijan as an opportunity for economic advancement. On Wednesday, he, once again,
spoke of opening “communications” lines with neighboring states—a euphemism used to signal opening of the borders that Russia is imposing on Armenia through the November 9 agreement.

He said he would be discussing this topic during his visit to Georgia, signaling that since the parliament approved his proposed plan—only with votes by his Civil Contract party members—he has been working to advance the provisions of that scheme.

“The topic of development of regional communications plays a key role in the agenda of our discussions with both Iran and Georgia, and in this context I attach importance to the North-South project, which connects our border with Iran to our border with Georgia,”

“The establishment of a railway communication with Russia and Iran is highly important for us. In order to solve this issue we are discussing the re-opening of communications within the Armenia-Russia-Azerbaijan trilateral format,” explained Pashinyan.

“To this end, we are determined to make efforts to achieve concrete results, of course, understanding that in its turn Azerbaijan is expecting communication between its western regions and Nakhichevan,” added Pashinyan, without addressing the fact that Azerbaijani forces have breached Armenia’s sovereign border since May 12 and have been attacking Armenia’s borders on a regular basis.

While mentioning Armenia’s inclination “to restore the peace process with Azerbaijan within the framework of the OSCE Minsk Group Co-Chairmanship,” Pashinyan also highlighted the efforts toward demarcation and elimination of borders with Azerbaijan saying that Yerevan is “working on creating the necessary conditions” to advance this issue.

Baku Has Given Azerbaijani Names to Several Cities in Syunik