Pashinyan and Aliyev to Meet in Brussels Next Month 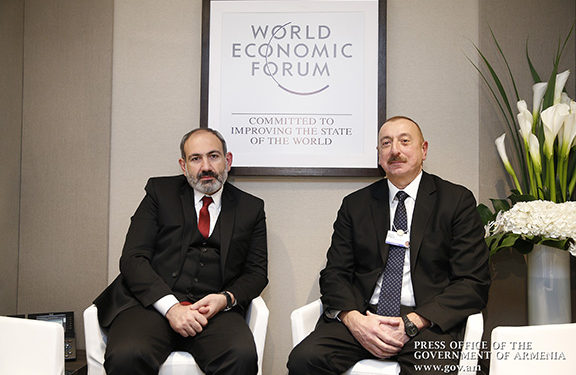 Prime Minister Nikol Pashinyan and Azerbaijan's President Ilham Aliyev met on the margins of the Davos Economic Forum in Jan. 2019

The leaders of Armenia and Azerbaijan, on the initiative of the President of the European Council, have agreed to meet and also to establish direct contacts between the two countries.

Michel announced that he had telephone conversations Friday with the President Ilham Aliyev of Azerbaijan and Prime Minister Nikol Pashinyan, as a continuation of discussions he had with the two leaders earlier this week regarding the situation in the region

According to an official statement from the Council of Europe, “the leaders of the two countries agreed to meet in Brussels to discuss the regional situation and ways to resolve differences for a prosperous and stable South Caucasus, supported by the European Union.”

According to official Brussels, during the telephone conversations with Charles Michel, the “two leaders also agreed to establish a direct line of communication at the level of defense ministers, which will serve as a mechanism for preventing incidents.”

This will be the third face-to-face meeting between the leaders of Armenia and Azerbaijan since last year’s war. The previous two were organized on the initiative of Russia and took place in Moscow under the leadership of President Vladimir Putin.