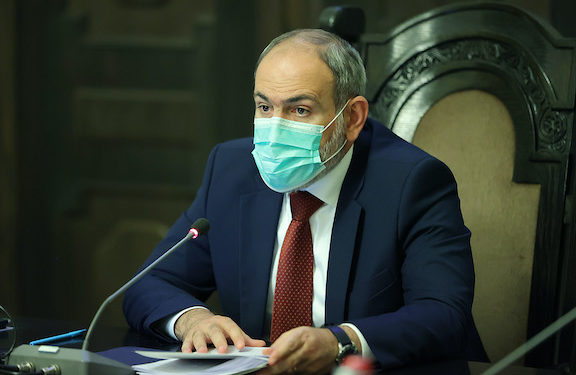 Acting Prime Minister Nikol Pashinyan on Thursday said the deployment of Russian peacekeeping troops along the entire length of the Armenia-Azerbaijan border must be taken into consideration, adding that such a move will facilitate the task of demarcation and delimitation of borders without a risk of a military clash.

“We are going to discuss this topic with our Russian partners. Our government is going to take all necessary measures for ensuring peace, security and stability in the region. We will act in accordance with the mandate gained from the citizens of Armenia,” Pashinyan said at the start of the weekly cabinet meeting on Thursday.

A fragile ceasefire was brokered by Russia on Wednesday, after Azerbaijani forces attacked Armenian positions in the Gegharkunik Province, killing three soldiers and injuring four others. Tensions along the Armenia-Azerbaijan border have been mounting since Azerbaijan breached Armenia’s border on May 12 and advanced its troops in the Gegharkunik and Syunik provinces. Since last week, Azerbaijani forces stationed in Nakhichevan have been firing on Armenia positions mainly in Yeraskh, which is located in the Ararat Province.

The Kremlin did not comment on Pashinyan’s renewed call for Russian peacekeepers. Russian President Vladimir Putin’s spokesperson Dmitry Peskov on Thursday told reporters that “contacts with Yerevan continue. I have nothing more to add” when pressed about the issue.

According to the Tass news agency, Peskov said that Russia has made a lot of efforts to restore the ceasefire on the Armenian-Azerbaijani border, adding that the efforts would continue.

“Yesterday escalation was reported on the Armenian-Azerbaijani border. You know that the representatives of Russia have made a lot of efforts in order to restore the ceasefire regime. The works continue, Russia continues its contacts with Yerevan and Baku in order to fully ensure the implementation of the trilateral statements,” Peskov told reporters, according to Tass.

During the cabinet meeting on Thursday, Pashinyan also touched on Armenia’s pending chairmanship of the Collective Security Treaty Organization—the CSTO—saying Yerevan understands the importance of avoiding security threats for the organization.

He said Azerbaijan not only continues to illegally stay in Armenia’s sovereign territory, it also takes measures to provoke the situation all in an attempt to discredit the CSTO.

“Azerbaijan accuses Armenia of launching provocations. Armenia, being as member of the CSTO, which will assume its chairmanship from September, understands its responsibility of not creating security threats for the CSTO, not engaging the allied states into military operations, and I officially rule out any provocative actions by the Armenian Armed Forces,” Pashinyan said.

He also proposed the deployment of a CSTO monitoring mission along the Armenia-Azerbaijan border in order to identify the side that is provoking the situation. “If such a mission would not be possible, there could be other acceptable international solutions for us,” he added.

Pashinyan also declared Yerevan’s support for the process of demarcation and delimitation of borders as outlined in both the November 9 and January 11 agreements signed by the leaders of Armenia, Azerbaijan and Russia. He said Baku’s continued insistence that Yerevan opposes the process “does not correspond with reality.”

Pashinyan accused Azerbaijan of disrupting any opportunity for dialogue through all its actions, and thus is discrediting the November 9 and the January 11 agreements by its  rhetoric and actions.

“Azerbaijan continues the sham trials of Armenian prisoners of war, sentencing them to long terms in prison. Special attention should be paid to the fact that almost all POWs who have been convicted recently have been captured after November 9 in the responsibility zones of the peacekeepers,” said Pashinyan.

“Azerbaijan continues applying aggressive rhetoric and actions, at the same time not responding to all the proposals by the international community aimed at a political and lasting solution of the situation, including the April 13 statement of the OSCE Minsk Group Co-Chairs which called for the resumption of talks,” added Pashinyan.