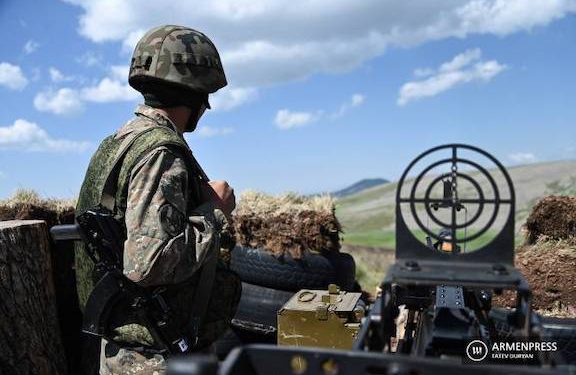 An Armenian soldier at a border position

Prime Minister Nikol Pashinyan said Tuesday that the international community’s silence on Baku’s aggressive policies against Armenia has emboldened Azerbaijan, thus allowing it to attack Armenia’s eastern border, which he called an act of aggression.

Pashinyan was speaking at a National Security Council session on Tuesday after an aggressive attack on Armenia Tuesday, which was halted after a ceasefire was declared through Russia’s mediation.

Below is the text of Pashinyan’s remarks as presented by his press office.

The current developments can be unequivocally assessed as a direct aggression against the sovereign territory of the Republic of Armenia.

As a result of the aggressive actions of Azerbaijan launched on May 12 of this year, Azerbaijan has occupied nearly 41 square kilometers (Eds: 10,000 acres) of the sovereign territory of the Republic of Armenia.

As a result of the silence from our international partners, Azerbaijan continues its aggressive actions. My assessment is unequivocal: Azerbaijan and the forces encouraging it are targeting our sovereignty, our statehood, our independence.

Yes, today we had a difficult day, and we are living through difficult days. But today we also showed that we are here, we exist, we are a state, we are a nation and the language of compulsion is inadmissible for us. We can negotiate, we can seek and find mutually acceptable solutions, we act as a responsible member of the international community. But we will not allow anyone to speak with us in the language of threats.

I call on the international community to make statements—targeted statements—condemning Azerbaijan’s aggression. Talk of a border dispute is absurd and senseless. There is no border dispute, there is aggression against the sovereign territory of the Republic of Armenia. The borders between Armenia and Azerbaijan have been clear since the Soviet era, by legally binding agreements. And if the problem was a border dispute, then Azerbaijan should have accepted our proposal of withdrawing forces simultaneously from the borderline between Soviet Armenia and Azerbaijan, deploying international observers along the borderline and launching the process of demarcation and delimitation of borders long ago. Azerbaijan, which has not accepted this proposal, is an aggressor state and must unequivocally withdraw its forces from the sovereign territory of Armenia. Its hopes to impose its will on Armenia are futile.

The Government and the people of the Republic of Armenia are determined, and we will defend our sovereignty, territorial integrity, statehood and independence by all possible means.

At the same time, we continue to emphasize the need for a peaceful resolution of the situation, all our previous proposals remain in effect. We are committed to the provisions of the November 9 and January 11 trilateral statements.