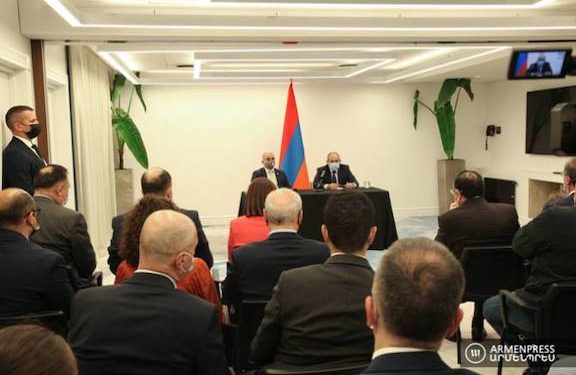 “I am ready to take all minefield maps and I call on Aliyev to bring all captives,” Pashinyan Says.

Prime Minister Nikol Pashinyan said he is ready to meet with President Ilham Aliyev of Azerbaijan, who last week expressed his willingness to meet with the Armenian leader, only if the discussion were mediated by the OSCE Minsk Group co-chairs.

Pashinyan also signaled that he would hand over all minefield maps to Aliyev, if the Azerbaijani leader releases all Armenian prisoners of war. Of late, the release by Baku of Armenian captives has been preconditioned with the surrender of critically strategic maps of minefield located in the now occupied territories of Artsakh and near the Armenia-Azerbaijan border. The Armenian leader clarified that the maps were “only of humanitarian significance” and do not resolve military and security issues.

“The President of Azerbaijan has announced that he is ready to meet with me. Back in July I had declared that we are ready to meet at both high and highest level, which meant on the level of Foreign Ministers and leaders of countries. In a recent speech at the UN General Assembly, I stated that the Nagorno-Karabakh issue is awaiting resolution,” said Pashinyan during a meeting on Sunday with Armenian community representatives in Lithuania’s capital, Vilnius, where he is on an official visit.

“On several occasions I have welcomed the statements of the OSCE Minsk Group Co-Chairs, in which they stress the need to solve the Nagorno Karabakh conflict and resume the peace process toward this end,” added Pashinyan.

“You see, the President of Azerbaijan complains that the quality of the maps we transferred before was not good. We gave the maps that we have, that is, we do not keep better quality maps in the drawer. I do not rule out and I know that there is a problem with the quality of the maps. Why? Because the quality of the map depends on the professional qualities of the cartographer. And we are sincere here, we are open, and we do not intend to deceive anyone, because here we are talking not only about Azerbaijan, but also our mediating partners, which are our allied countries,” Pashinyan said.

“We have given the maps that we have, we simply do not have other maps of the area. This is a fact, and this must be recorded as a reality. As for trust, it is clear that in this situation Azerbaijan does not trust us, we do not trust Azerbaijan, the whole problem is to try to move forward in small steps so that at least some trust is built,” he said.

What Pashinyan did not mention was Aliyev’s insistence that Yerevan sign a “peace treaty” with Baku that envisions all of Artsakh under Azerbaijani rule. On several occasions, Aliyev, who has disparaged the Minsk Group co-chairs, has claimed that the Karabakh conflict is over.

Pashinyan, during a joint press conference with his Lithuanian counterpart Ingrida Šimonytė, said that his government was ready to begin the process of delimitation and demarcation of borders between Armenia and Azerbaijan, saying the process should begin with creating all the necessary conditions for it.

“Of course, the early return of (Armenian) prisoners of war, hostages and other detainees still held in Azerbaijan is a very important issue,” Pashinyan added.