Pashinyan Steps Up Call for ‘Peace Treaty’ with Azerbaijan, Relations with Turkey 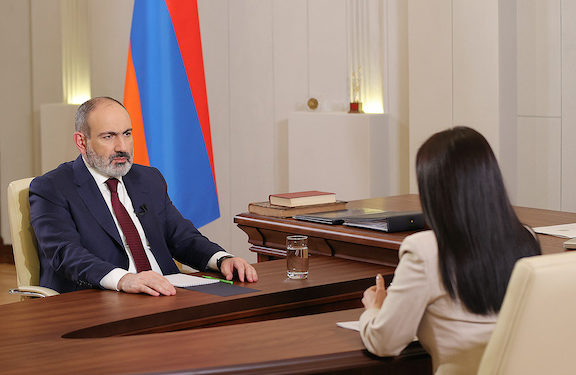 Prime Minister Nikol Pashinyan on Monday said that Armenia was ready to begin negotiations with Azerbaijan for a “peace treaty,” and also pressed for normalization of relations with Turkey “without preconditions.”

In another virtual press conference, his second this month, Pashinyan elaborated on his views on the future of relations with Azerbaijan saying a peace treaty should be signed between Armenia and Azerbaijan, emphasizing that a final document must emanate from negotiations.

He claimed that the entire gist of the negotiations taking place for the past 25 years has been the eventual signing of a peace treaty. ”We think that those talks should take place, Armenia is ready for that,” Pashinyan said.

In discussing Armenia’s recognition of Azerbaijan’s territorial integrity—an issue that Ankara has preconditioned for normalizing relations with Turkey and Baku has insisted upon—Pashinyan was more evasive. He attributed comments to an unnamed analyst who during a supposed conversation with him had clarified some issues, which he presented as part of a solution for Armenia.

He urged for distinguishing the rational and emotional aspects of statements from Azerbaijan’s leaders.

“An analyst recently made a very strong observation during our conversation. He drew attention to the fact that statements are often made by Azerbaijan, which are a reflection of the statements made in Armenia after 1994. For example, when Azerbaijan announces that the Karabakh issue is resolved. That analyst drew my attention to the fact that for decades, after 1994, statements were made from Armenia and Artsakh that the Karabakh issue had been resolved,” explained Pashinyan.

“There are often statements about Yerevan being an Azerbaijani city. The analyst drew my attention to the fact that many statements have been made since 1994 that Baku is an Armenian city. In other words, there is a certain element of revenge in those statements, that must be taken into consideration. An emotional approach is not good for the process,” added Pashinyan.

He also said that in 1992 Armenia’s parliament ratified an agreement, which states that Armenia recognizes the territorial integrity of Azerbaijan and the inviolability of its borders, and Azerbaijan has ratified a similar agreement.

He doubled down on this logic by saying that the Madrid Principles, on which the OSCE Minsk Group co-chairs have been mediating the Karabakh conflict, prioritized the principle of territorial integrity of the sides involved. Pashinyan did not mention the other principle—right to self-determination—which was also ingrained within the flawed Madrid Principles.

“This is a strategic agenda for us,” said Pashinyan. “When we adopted and recorded it in the government’s program… We understand that it does not depend only on us, but it is obvious that we will consistently pursue this agenda. I want us to look at issues from a rational standpoint.”

Pashinyan also reiterated his government’s interest in normalizing relations with Turkey “without preconditions.”

“Do we want to open the Armenia-Turkey border? Yes. We are sincere in this approach,” said Pashinyan who added that the process did not success in 2009, and now that experience should inform the current effort.

“Yes, there were no preconditions in the Armenian-Turkish protocols of 2009, but later preconditions appeared. We cannot guarantee that this will not happen again. We need to understand how interested the parties are. The process has been transparent from the very beginning of the political negotiations. This has never been the case before,” said Pashinyan

Pashinyan rationalized that one of the factors that resulted in the failure of the 2009 Protocols effort was that the negotiations were taking place between the presidents of Turkey and Armenia. He explained that at the time, Turkey had a parliamentary form of government, where the president was a symbolic figure, while Armenia had a presidential form of government. He further added that Turkey is now engaged in talks through a mandate presented by its president, saying this was “one of the factors that can have a certain impact on the process, hoping, a positive impact.”

The prime minister also said that Armenia would most likely take part in a diplomatic forum taking place in Antalyan Turkey in March. Turkey’s foreign minister Mevlut Cavusoglu, last week, invited Armenia to take part in the event. Armenia’s Foreign Ministry, however, said that it is looking into the matter and whether it would be appropriate for the foreign minister to attend such a meeting while negotiations on normalization of ties were ongoing.

Pashinyan claimed that after the first meeting, the format of Armenia-Turkey talks has been decided, a statement that was not echoed by Armenia’s Foreign Minister Ararat Mirzoyan, who said last week that the first meeting was held to voice both parties’ readiness to engage in talks.

“I think that if this dynamic is maintained, it is very likely that Armenia will accept the invitation to participate in this forum. Of course, everything depends on the situation at that moment, but at least after the first meeting, the probability has increased that Armenia will accept the invitation, because if a conversation has started, it will be very illogical, if we miss that opportunity to speak, especially given the fact that we will have the opportunity to hold discussions in a much broader context,” Pashinyan said.

He also cited the international community’s “enthusiasm” for the process, saying that in addition to Russia, the European Union and the United States, other countries in the region “are also very interested” in the normalization of ties between Armenia and Turkey.

Pashinyan was also asked by reporters about Armenia’s abrupt decision to commit peacekeeping troops to the Collective Security Treaty Organization’s mission in Kazakhstan earlier this month. Pressed on whether the CSTO should have sent peacekeepers during the 2018 people’s movement that was led by him, Pashinyan said that the situation was different in Kazakhstan since street battles had already taken over in major cities in that country.

“When we decided to send a peacekeeping mission to Kazakhstan, there were already street battles there, there were casualties,” said Pashinyan, adding that his government wants to improve the CSTO’s crisis response mechanism. He did not touch on the fact that the Russia-led security group rejected Armenia’s appeals for assistance during the 2020 war or when Azerbaijan had breached Armenia’s sovereign border last May and had advanced its position into Armenia.

“It would have been strange if such a situation existed for the first time, and Armenia said that it opposed it. It is in Armenia’s interest to have the CSTO be an effective system. This answers all the questions,” he said adding that Armenia has clearly stated that he CSTO forces cannot be involved in any domestic political matters, but can be engaged in protecting structures of strategic importance.

He said that the Armenian peacekeepers were guarding a bakery. “Protecting a bread factory does not affect the internal political process in any way,” said Pashinyan.