As Pashinyan Touts Democracy, Tracy Calls for Probing Use of Force Against Opposition Whose Protests Continue 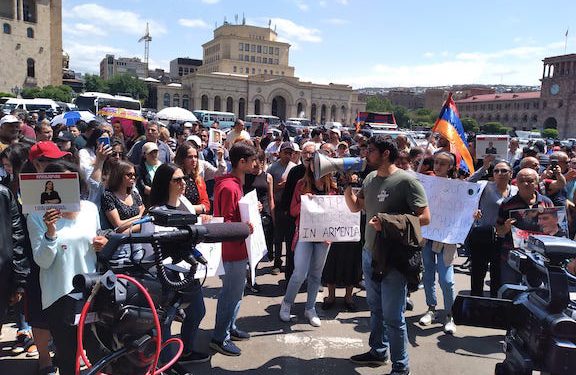 Opposition protesters gathered outside Yerevan’s Marriott Hotel in Republic Square, where Prime Minister Nikol Pashinyan was presiding over a “Democracy Forum,” during which he touted Armenia’s democratic advances as a pivot to peace in the region, and U.S. Ambassador to Armenia voiced concern about police use of force against demonstrators.

Saying that the U.S. Embassy has seen images of police violence against demonstrators, Tracy said that there were concerns and said these episodes must be investigated and there should be accountability.

The Ambassador said that democracy is a process for ensuring progress. “People write me about police reforms and ask me ‘is this your democracy?’ No, democracy isn’t perfect, democracy is a continuous process to ensure accountability, to protect human rights, but this isn’t just one part. In case of the police, what matters is the accountability of their actions,” she added.

Tracy pointed out that problems concerning police conduct occur in the United States as well. She said the United States seeks to carry out reforms in the area. “Meaning, this isn’t something that happens only in Armenia. What matters is for accountability to exist in these issues,” Tracy said.

Meanwhile, opposition lawmakers had gone to the hotel but were barred from entering the conference hall where the forum was being held, further fueling their claims that democracy was dead in Armenia. Journalists were also not allowed to enter the conference hall.

Opposition lawmakers accused Pashinyan of only inviting pro-government lawmakers and supporters to the Democracy forum. They criticized the government’s claims that Armenia is “bastion of democracy,” and complained that Pashinyan and his government were selective about which sector they are engaging in the country’s processes.

On Friday, opposition protesters marched from Yerevan’s France Square to the presidential residence, where the Lithuanian president Gitanas Nauseda was meeting his Armenian counterpart Vahagn Khachaturyan.

Gegham Manukyan, a member of the opposition Armenia Alliance said their goal was to show that Prime Minister Nikol Pashinyan has no mandate to negotiate (with Azerbaijan) on behalf of Armenia.

In his remarks at the Democracy Forum, Pashinyan complained that “democracy was being used to destroy democracy,” presumable voicing his disdain about opposition protests.

It is my strongest conviction that the best way to overcome this challenge is the establishment of democratic institutions, the democratization of state institutions literally based on the professionalism, lawfulness, transparency and accountability of the state institutions,” Pashinyan said.

He went on to advance his government’s policy of “peace in the region,” at a time when Azerbaijan continues to undermine all agreements that were reached following the Artsakh war.

“Now, in order to strengthen democracy, it’s very important that we unite around one more mission. As we have brought democracy to Armenia, so let’s bring peace to Armenia, because I think that one cannot exist without the other,” said Pashinyan, adding “with pride” that his political team “is united around this mission.”