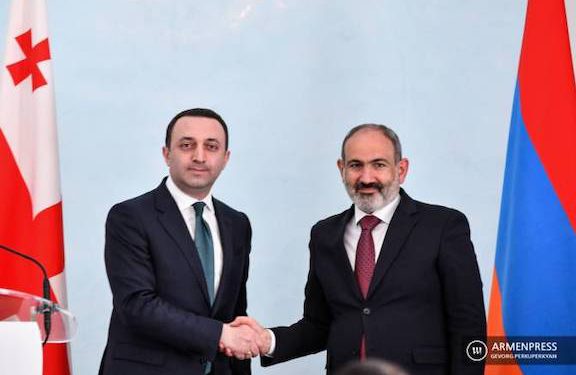 During his official visit to Georgia, Prime Minister Nikol Pashinyan advanced his government’s so-called “regional peace and stability” agenda, which, of course, was embraced by his Georgian counterpart Irakli Garibashvili.

Pashinyan and Garibashvili held a joint press conference in Tbilisi on Wednesday after talks aimed at strengthening relations between the two neighboring countries.

“Of course, the war in Karabakh has been a challenge for our region,” said Georgia’s Garribashvili. “But now, having gotten acquainted with Mr. Prime Minister’s [Pashinyan’s] new vision, I am confident that this challenge will transform into a new opportunity that will bring prosperity to Armenia and the Armenian people. I want to also say that we attach enormous importance to Armenia’s political and economic stability, as it is tied directly to the stability of our country and the region in general.”

“Consequently, I would encapsulate our common regional goal in three words: peace, stability, and prosperity, something that binds together all three countries of our region,” added the Georgian prime minister referring to Georgia, Armenia and Azerbaijan.

“As you know, Georgia has always been an advocate of peaceful cooperation and coexistence in the South Caucasus,” said Garibashvili, who cited his recent mediation with Azerbaijan to secure the release of Armenian prisoners of war being held captive in Azerbaijan.

The Georgian leader was quick to point out that his mediation involved strong-arming Yerevan into surrender strategic maps in order to secure the release of the captives by Azerbaijan, which is bound by the provisions of the November 9 agreement to return all POWs and captives.

While voicing optimism and committing to further mediation on confidence building measures, Garibashvili said that regional peace and stability will bring greater opportunities for the development of the region.

“I want to also note that given the numerous conflicts raging in the course of the past three decades in the region, with some of them still unresolved, our common vision and effort must be dedicated to the region’s gradual transformation into a place of new opportunities, development, and peace. This must be our main vision, and we will continue working in this direction,” said Garibashvili.

Pashinyan, in his turn, thanked the Georgian prime minister for his mediation that resulted in the release of 15 POWs in June.

“Unfortunately, there are many unresolved issues, conflicts and threats in our region,” said Pashinyan. “But we are trying to help each other to focus on the opportunities that exist in tandem. I believe that by supporting each other to take advantage of existing opportunities is the very formula that should make risk management more feasible and accessible for us.”

Pashinyan also discussed the need to advance democratic principles and praised his Georgian counterpart’s government for his government’s efforts for “the opportunities created for the preservation and development of the identity of the Armenians of Georgia. This is a topic that unites us, makes our relations more effective, promising and strategic.” In the official readout of the press conference, there was no mention of Pashinyan addressing the repressive policies of official Tbilisi toward Armenians in Georgia, especially those living in Javakhk.

Later on Wednesday, Pashinyan advanced his government’s plan for establishing “regional peace and stability” during a meeting with Georgia’s president Salome Zourabichvili. Armenia’s Foreign Minister Ararat Mirzoyan also discussed the issue when he met with his Georgian counterpart, David Zalkaliani.

Moscow Warns Allies About Their Ties with ‘Unfriendly’ Countries