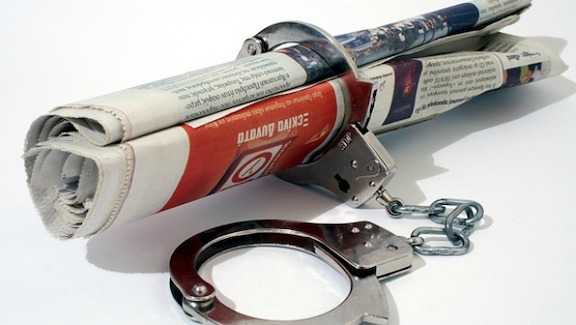 YEREVAN (Azatutyun.am)—In what Armenia’s leading media groups see as a new restriction on press freedom, pro-government lawmakers have drafted legislation that would empower state bodies to withdraw the accreditation of journalists.

An Armenian law on mass media currently does not allow the parliament, the prime minister’s office and other government agencies to revoke such accreditations that are typically valid for one year.

Amendments to the law put forward by two deputies from the ruling Civil Contract party would empower the authorities to strip reporters of their press credentials if they are deemed to have violated “disciplinary rules” of relevant bodies.

One of those lawmakers, Artur Hovannisyan, said on Tuesday that the proposed amendments are first and foremost aimed at regulating the work of parliamentary correspondents of Armenian media outlets. He claimed that they have frequently insulted and even “threatened” members of the National Assembly.

Hovannisyan insisted that each state body would set clear rules of conduct that would not restrict journalistic activity.

“Those decisions could be very arbitrary, baseless or based on very weak grounds,” countered Ashot Melikyan of the Yerevan-based Committee to Protect Freedom of Speech.

Melikian suggested that the authorities want to put in place a legal mechanism for barring “undesirable” journalists from covering parliament sessions, cabinet meetings and other major events.

Hripsime Jebejyan, a correspondent for the Aravot daily who covers parliament, likewise said that Prime Minister Nikol Pashinyan’s political allies want to prevent journalists from asking them tough questions.
“When a journalist asks a [tough] question they often get agitated and perceive it as an offense,” Jebejyan told RFE/RL’s Armenian Service.

“Once again they are entering the sphere of journalistic activity and restricting our work,” she said.

Pashinyan’s political team has already been condemned by Armenian press freedom groups as well as Western watchdogs such as Freedom House and Amnesty International for tripling maximum legal fines for “slander” and making it a crime to insult state officials.

Dozens of government critics have been prosecuted for offending Pashinyan and other officials since the corresponding amendments to the Armenian Criminal Code took effect last September.

The ruling party has also been widely criticized for seriously restricting last summer journalists’ freedom of movements inside the parliament building in Yerevan. Parliament speaker Alen Simonyan cited security concerns and the need for greater media respect for parliamentarians.

Journalists and media associations rejected that explanation. They also expressed outrage at Simonyan’s attempts to block press coverage of an August 11 parliament session that descended into chaos amid bitter insults traded by pro-government and opposition deputies. Security officers entered the press gallery overlooking the chamber and ordered journalists present there to stop filming or photographing the ugly scenes.

Simonyan, who is a close Pashinyan associate, on Tuesday defended the proposed regulation of media accreditations while urging journalists to “gather and draw up” rules of conduct for themselves.
“Or else, you will face rules set within [state bodies] and will have to obey them,” warned the speaker.