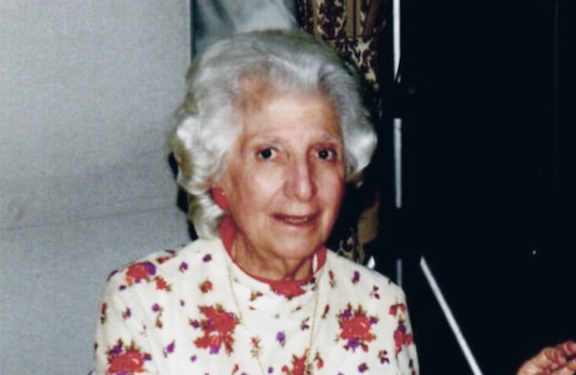 Zaruhy Sara Chitjian, a long-time benefactor of Armenian studies programs and devoted supporter of the Asbarez Newspaper passed away on Monday, the UCLA Cotsen Institute of Archaeology reported.

As a longtime supporter of UCLA and the founder of the Research Program in Armenian Archaeology at the Cotsen Institute of Archaeology. Chitjian lived to see US president Joe Biden officially recognize the Armenian Genocide.

Zaruhy Sara Chitjian, was born in Mexico City in 1933 to Hampartzoum and Ovsanna Chitjian, both survivors of the Armenian Genocide who had met and married in Mexico. In 1935 her family immigrated to the United States settling in Los Angeles where Sara spent the remaining of her life. She earned her Bachelor’s degree in Psychology in 1956 from UC Los Angeles and a year later went on to earn her teaching credentials. She dedicated her life to education and spent the next 40 years teaching for the Los Angeles Unified School District.

As a descendant of survivors of the Armenian Genocide she had a vested interest in preserving Armenian history and culture, but she had a unique appreciation for cultural heritage in general. As a young teacher at Monlux Elementary, Sara installed the same appreciation for culture into her young students who built models of early California, had visits for a geisha to learn about Japanese Tea Ceremony, and an Aikido sensei who gave demonstrations and taught about the philosophy of martial arts.

While teaching at Dixie Elementary School, she proposed to teach Armenian history and culture for the “Mini Classes” program of the school, forever changing the landscape of the curriculum throughout Los Angles by becoming the first teacher to raise awareness of Armenian culture through a formal course. She found exciting and creative ways to teach Armenian history and culture, such as having her students try to write their names in Armenian script as she read them about the origin of the alphabet. She also invited prominent Armenian scholars, such as Dr. Richard Hovannisian, Dr. Gerard Liberadian, and Dr. Oshin Keshishian to give guest lectures on topics ranging from art to genocide.

Sara’s numerous awards in recognition for her contributions and service as a teacher are clear testament to her dedication and passion for educating children. She successfully petitioned for the City of Los Angeles to make April 24th, the day of commemorating the victims of the Armenian Genocide, an excusable day of absence on the school district’s academic calendar. In the 1970s she created an Armenian Teacher Association and The Armenian Urban Center programs, the former trained teachers in providing aid to students who were fleeing the Syrian civil war and the latter developed scholastic curriculum for teaching about Armenian history and culture. In 2017, the Armenian National Committee – Western Region announced named one of its awards the Zaruhy “Sara” Chitjian Armenian Genocide Education Award in honor of Sara’s exemplary commitment to Armenian causes and dedication to preservation of the Armenian heritage through education and philanthropy. The award is present to outstanding educators of Armenian descent who have gone above and beyond to teach Armenian history, culture, and about the Armenian Genocide.

Sara believed strongly in the mission of public education and in memory of her parents and all survivors of the Armenian Genocide, she established the Hampartzoum and Ovsanna Chitjian Foundation to support Armenian Studies programs in higher education. She established four endowments at leading universities each with focus on a specific aspect of Armenian heritage. At University of Southern California (USC) her endowment supports research and study of the Armenian Genocide, California State University, Northridge (CSUN) is the steward of the Chitjian Family archive, at the American University of Armenia (AUA) her endowment supports an entrepreneurship program, and at the University of California, Los Angeles (UCLA) her endowment supports archaeological research in Armenia. Sara was an avid supporter and promoter of Armenian archaeology and cultural heritage. In 2006 she partially sponsored renewed excavations of Dvin, a capital and a large commercial city of early medieval Armenia, and at the world-renown Areni-1 cave site. In 2013, she donated a transformative gift to the UCLA Cotsen Institute of Archaeology that established the Research Program in Armenian Archaeology ensuring that UCLA has a leading presence in the field.

“In my father’s stories unity is the number one thing or finding a way to be united… ‘Here lies an Armenian boy who suffered all his life because of Armenian dis-unity’…he wanted that on his tombstone. He was telling the Armenian community ‘unite’ and we still don’t get that message…this is why I am doing what I am doing…not to forget.” Sara carried her father’s message of unity through all her life and works, preserving the memory of the past and promoting awareness was of outmost importance to her and the various programs she established ensure that the rich history and heritage of the Armenian people is preserved and passed on for generations to come.

Her memory and her life-long mission to spread knowledge and raise awareness of Armenian history and cultural heritage will be carried on in the work of the members of the Armenian Archaeology Lab whose research is made possible by Sara’s generosity. We are grateful for her unwavering support and will forever hold her dear in our memories.

For more information about the Sara’s legacy visit the Chitjian Foundation page.