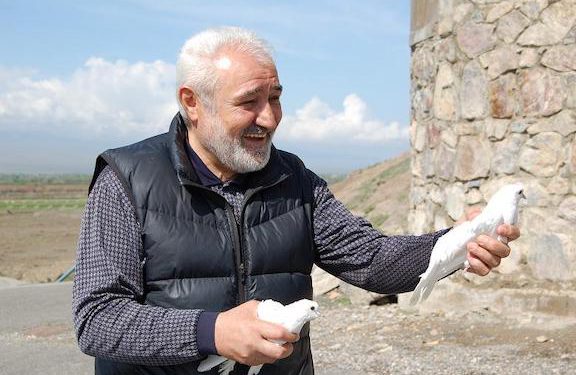 Davoyan was born in 1940 in Mets Parni, in Armenia’s Spitak region. At the age of nine he moved to Leninakan with his family where he graduated from high school and from the local Medical College in 1958. In 1959 he moved to Yerevan to study Philology and History at the State Pedagogic University and graduated in 1964. During his student years he worked as proof reader for the “Literary Weekly” and as a member of the founding editorial board of “Science and Technology” monthly, editing the Life Sciences and Medical section. From 1965 to 1970 he was editor of the poetry and prose section of the “Literary Weekly.”

From 1970 to 1975 he worked as senior adviser at the Committee for Cultural Relations with the Diaspora. From 1975 to 1990 he worked as Secretary of the Central Committee for Armenia’s State Prizes. In 1989 he was appointed Deputy Chairman of the Parliamentary Commission for the Earthquake Struck Disaster Area. In 1994 he became the first elected president of the Writers’ Union of Armenia. From 1999 to 2003 he served as Adviser (on cultural and educational issues) to the President of the Republic of Armenia.

His first poem was published in 1957 in the Leninakan Daily “Worker.” He has since published well over thirty volumes in Armenian, Russian, Czech and English. His works were widely translated all over the Soviet Union and published in countless Literary Magazines and Journals. Selections of poems have also been translated and published in literary periodicals in Italy, France, Syria, former Yugoslavia, Iran, China and USA. He has had countless appearances on national TV and Radio, written countless articles and given countless interviews to newspapers and magazines including an interview with the French Daily “Figaro” in 1977 and several interviews with “Literarurnaya Gazeta”, the most prestigious literary weekly in the former Soviet Union published in Moscow.

In 2003 he received the President’s Prize for Literature for his children’s book “Little Bird at the Exhibition.”

In 2010 he received the first degree Medal “for services to the fatherland” from the President of the Republic of Armenia.

In 2012, he received the CIS “Stars of the commonwealth” international award in Moscow.
Three of his significant books were blocked from publication by the soviet regime. “Requiem” was blocked for five years before it was published in Yerevan in 1969. “Massacre of the Crosses” was also blocked and was first published in Beirut in 1972. “Toros Rosslin” was also first published in New York in 1984 because of the block on its publication.