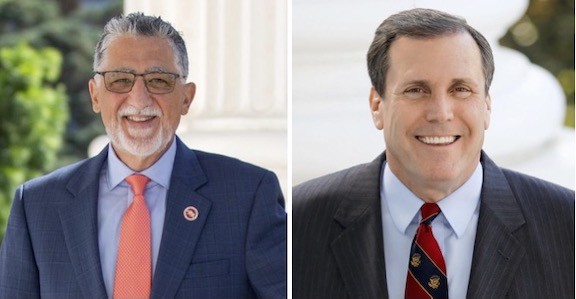 SACRAMENTO—Senators Anthony J. Portantino and Scott Wilk announced the decision by the California Public Employees’ Retirement System (CalPERS) to restrict the number of investments and holdings they have in the Republic of Turkey. CalPERS is the largest defined-benefit public pension in the United States.

“California continues to take significant and historic steps to end the practice of divestment from countries that violate principles of human rights,” stated Senator Portantino. “This week CalPERS took important, proactive action and did the right thing by initiating the process of eliminating their holdings in Turkey. I am grateful to the community and all the activists for their tireless efforts and tenacity to push forward on divestment and to the CalPERS Board for responding to our collective plea.”

The CalPERS action followed a similar path taken by the State Teachers’ Retirement System (CalSTRS). Senator Portantino and representatives from Glendale Community College, Glendale Unified School District and the Armenian American community announced the CalSTRS action on June 16 at a press conference on Artsakh Avenue. During the event, Senator Portantino challenged CalPERS to follow CalSTRS and do the right thing. Today’s announcement underscores the action by CalPERS to do just that.

At the outset of the legislative session, Senators Portantino and Wilk introduced SB 457 to require the CalPERS and CalSTRS Boards of Administration to allow school districts and cities to opt out of investment vehicles issued or owned by the Republic of Turkey. The idea for the bill came from Glendale City Councilmember Ardy Kassakhian who recognized the injustice of Glendale’s significant public workforce having its hard-earned wages invested in Turkey.

“In line with US policy rejecting Turkey’s ongoing Armenian Genocide denial campaign, CalPERS’ decision to divest from Turkish government investments is a bold and principled one for which we have long advocated,” stated Armenian National Committee of America–Western Region Chairwoman Nora Hovsepian. “We are grateful to Senator Anthony Portantino for spearheading this effort and look forward to further similar successes as the walls of denial continue to crumble.”

The State of California has a long history of divesting from countries that violate human rights. In 1986, Governor George Deukmejian condemned South Africa’s apartheid policy by signing California’s divestiture law, aimed at pressuring the government to end its system of racial segregation. In 2008, Governor Arnold Schwarzenegger signed a Sudan divestment bill due to the ongoing genocide in the Darfur. Students from the University of California successfully lobbied the UC to divest from Turkey in 2017.

“We are pleased that CalPERS leadership has made this decision to be more socially responsible and take a stand against governments who abuse human rights,” stated AGBU Community Affairs Representative Talin Yacoubian. “The action taken by CalPERS, and earlier this year by CalSTRS, to eliminate their investments in Turkey is a strong stance against the genocidal government of Turkey. We thank the Senator for his steadfast commitment to what is right.”

In May, CalSTRS announced it was taking several steps to restrict its holdings in Turkey. They placed restrictions on three Turkish state-owned banks, which prevented them from being included in the CalSTRS portfolio. In addition, they directed external managers who have Turkish state-owned entities in their portfolios to re-evaluate each of these investments to assess their compliance with CalSTRS’ Environment, Social, and Governance (ESG) policy – a risk assessment that defines 25 risk factors that managers must consider when investing assets on behalf of CalSTRS. Finally, CalSTRS announced it was conducting additional risk evaluation of a Turkish-issued treasury that is currently the only investment issued or controlled by the Government of Turkey that they hold internally.

CalPERS announced that it has made an active investment strategy decision to narrow its overall investment exposure. The policy shift includes removing several countries considered immaterial and the most operationally challenging. The result is a substantial reduction in currency and equity exposure to Turkish issued securities between March 31, 2021 and June 30, 2021. CalPERS anticipates this number will continue to go down and that their holdings in Turkey will be entirely eliminated in the very near future.

“This is a historic and important action by CalPERS. Turkey should not be benefiting from the wages of the Armenian American public employees in California,” stated Senator Wilk. “I am grateful to both CalSTRS and CalPERS for responding to our effort and the Armenian American community that joined us in this successful effort.”

CalSTRS and CalPERS are the two primary California pension funds that have had portfolio interest with Turkey. Established in 1913, CalSTRS is the largest educator-only pension fund in the world, and the second largest pension fund in the U.S., with 975,000 members and beneficiaries. The market value of the CalSTRS investment portfolio was approximately $306.7 billion as of May 31, 2021. CalPERS, the largest defined-benefit public pension in the country, serves more than two million members in their retirement system and offers health program benefits to more than 1.5 million members and their families. Established in 1932, CalPERS had $392.5 billion in assets at the end of the 2020 fiscal year.