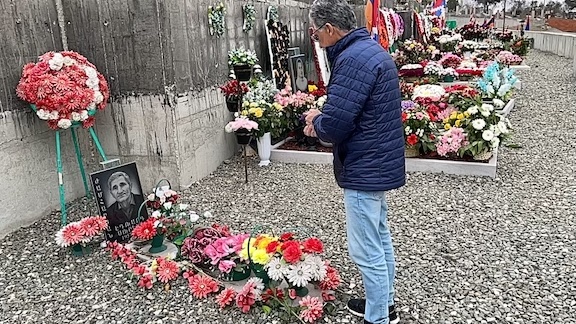 Sen. Portantino honors the memory of the heroes of last year's war

He Becomes the First State or Federal Elected Official from the U.S. to Visit the Region Since the End of the 44-Day War

California State Senator Anthony J. Portantino recently returned from an emotional trip to Artsakh, during which he toured the countryside and broke bread with heroes. It is believed that this is the first time a state or federal elected official has visited the region since the end of the 44-day war.

“I was honored to have been asked to go to Artsakh and deeply affected by my time there,” stated Senator Portantino.

“In particular, in the village of Taghavard, I encountered the most resilient and strong people I have ever met. Their pride and determination to live peacefully on their lands was both inspiring and emotional.  At the Baroness Cox Rehabilitation Center, I observed a classroom of autistic children receiving loving care and spent time with war heroes who are dealing with the significant personal consequences of the war.

Government officials and residents made ardent pleas to the international community to recognize the sovereignty of Artsakh and to advocate for human rights and dignity,” Portantino added.

While in Artsakh, the senator met with President Arayik Harutyunyan, Minister of Foreign Affairs David Babayan, Minister of Education, Science and Culture Lusine Gharakhanyan and leaders of the Artsakh Parliament.  In addition, he visited the frontlines during a tour of Taghavard village in the Martuni region.

In Taghavard, he had the opportunity to witness the consequences of the unprovoked war.  He assessed destroyed homes and a prominent church that was leveled by Azeri shelling.  Additionally, he was privileged to have met with local village leaders, soldiers and survivors of the war.  At the Baroness Cox Rehabilitation Center, he was able to spend time and share a caring voice with veterans suffering from the aftereffects of the tragic conflict.

Senator Portantino was also able to tour a school damaged by bullets and bombs but later revitalized by the Armenia Fund.  At a church, he was shown remnants of missiles and was sadly taken to a cemetery where family members proudly and emotionally mourn the loss of young men and women who bravely fought for their country.

“This was by far the most emotional visit I’ve taken to Artsakh.  The personal stories and first-hand accounts of the war were both inspiring and sad.  Walking through the rubble of a once thriving home with the grandson of the owner was quite emotional.  And seeing the harsh reality of adjacent Azeri military camps and infrastructure advances were imminent and concerning,” explained the senator.

“Standing below the deserted city of Shushi was particularly disturbing, as I have such fond memories of my last visit there.  And seeing the proximity to danger school children face every day when they go outside to play was unsettling and all too real,” added Portantino.

“Given the recent and continued aggression in Syunik and the unprovoked actions on the Shushi-Berdzor road, we know that the international community needs to act with humanitarian passion and dedicated support for the Armenian people who are facing a well-funded military with destructive intent,” concluded the Senator.