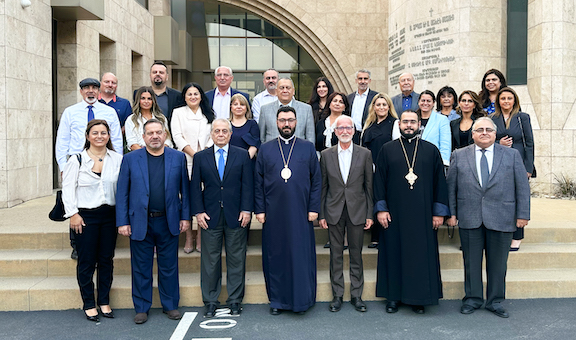 Western Prelate Bishop Torkom Donoyan disbursed more than $3 million to Prelacy Armenian Schools during a meeting with the Board of Regents and school principals held at the Prelacy on October 14.

Earlier this year, Donoyan had announced that through generous donations from benefactors, a $10 million fund had been established at the Prelacy to assist Armenian schools.

During the meeting it was emphasized that the funds the schools were receiving should be allocated toward reorganization and modernization of the schools, so that tangible advancements are made in all facets of education.

Prelate Donoyan commended the Board of Regents, the school principals, boards of education and all teachers who have dedicated their lives to the advancement of Armenian education. He also praised all the donors who, as he said, have spared from their own to ensure that future generations can receive an Armenian education.

Prelate Donoyan praised the schools saying the Prelacy Armenian Schools have a bright future and “will develop and prosper, enriching the life of our nation and filling our hears with pride and joy.”

Vahe Hovaguimian, the Chairman of the Prelacy Executive Council, welcomed the visitors and stressed that the purpose of the meeting was not merely to provide financial support to the schools, but rather to come together under one roof, as has been the wish of the Prelate to celebrate and emphasize the need for collective efforts to enhance the Armenian schools.

George Chorbadjian, the Executive Council Secretary, also commended the Armenian schools and reiterated that the Western Prelacy should be as the home to all those dedicated to elevating the Armenian schools. He also recalled how impressed Artsakh Foreign Minister David Babayan was when a few weeks ago he had the opportunity to visit several schools.

Chorbadjian also emphasized that the Western Prelacy’s commitment to elevate Armenian education also extended to Lebanon and outlined the support provided to the Armenian students in Lebanon during the time of crisis.

Board of Regents Chair Sarkis Ourfalian thanked the Prelate and the Prelacy bodies for their continued support of enhancing the Armenian school and made special mention of the Prelate’s efforts to intermittently honor educators who have dedicated their lives to the Prelacy Armenian Schools.

The principals also voiced their gratitude for the support from the Prelate Donoyan and the Prelacy, applauding their roles in the advancement of the schools.

In conclusion, Prelate Donoyan pledged that he will begin in-person visits to the schools—a tradition that was halted due to the pandemic.