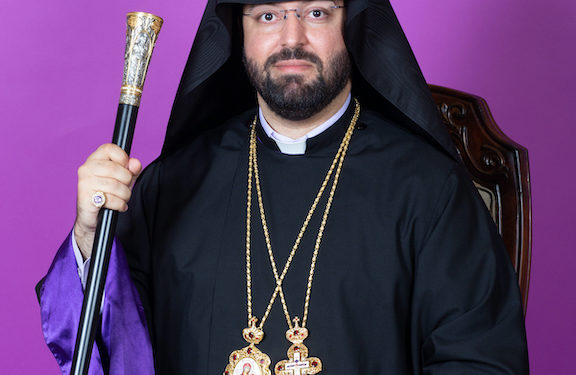 We Continue to Walk the Path of the Resurrection

The past year saw the world awaiting a divine intervention–an intervention that would transform the world and our lives, with the hope of which we live and strive and subsist amid all troubles and impediments. Undeniably, this past year was rife with a wide range of challenges and pressing crises which further affirmed that, as human beings, we are powerless, incapable, and alone without God. Yes, the world today awaits a divine intervention; in particular we, children of the Armenian nation, as we continue to face the bitter consequences of the latest war in Artsakh, the agony of lives and lands lost which has left a gaping wound in our hearts. However, it is not befitting a Christian nation to fall into despair and be shrouded in hopelessness. On the contrary; today on the glorious feast of the Resurrection, the Prince of Glory appears gloriously to the world. Thus, we are all invited to look to the present day and gaze into the future with eyes of hope, thus assuring the future of our nation and new triumphs before us by the will of God.

Our Lord, Divine Master, Redeeming Savior, He – the Word of God, was mocked, ridiculed, and beaten mercilessly in the final days of His earthly life. A cloak was placed on His shoulders and a crown of thorns on His head as a sign of disgrace. He was subjected to a brutal flogging by ruthless Roman soldiers, given a heavy cross to carry and forced to march the agonizing path to Golgotha where He was ultimately crucified and suffered an excruciating death. But to the enduring gladness of mankind, the agony of Christ’s death was followed by the triumph of His Resurrection, granting life, resurrected life, new vision, and a bright new dawn for mankind, for us all.

“I AM THE RESURRECTION” – The Resurrection, as an ideology, is the single most fundamental truth of the Christian faith, of which the Bible makes mention numerously. Christ was the first to be resurrected, and by His example He bequeathed a promise to all us mortals that the heavenly grace of resurrection awaits all those who live in Christ during their earthly lives, who walk the path of the crucified and Resurrected Christ, and who do not become discouraged and disheartened amid all of life’s blows for they carry the hope of the Resurrection in their souls.

O whip, your blows may kill my body, but they can never kill my soul which belongs to the Resurrected Christ.

As a nation which has suffered our own Golgotha, how magnificent and hallowed is the message of the Resurrection, how captivating and desirable, to live and breathe for all of eternity after all of the devastation and ups and downs the Armenian people have endured from the first centuries of Christianity to the present day. Throughout history, countless children of our nation have been persecuted, tortured, and martyred in the name of Jesus Christ. Embracing the hope of the Resurrection, Armenian saints and all innocent Armenian martyrs established Christ’s teaching throughout the Armenian lands by word, by works, and by self sacrifice. They built chapels, churches, and cathedrals which became rooted as pillars of the Christian faith in the hearts and lives of the Armenian people. Truly it is only from within a martyred yet resurrected nation that one can find such an eloquent testimony to God as from the marvelous prayer book of St. Gregory of Nareg; “Father, true essence, perfect being, uncreated, without beginning, timeless, causeless, incomprehensible, invisible, ineffable, unattainable, incomprehensible, inscrutable, infinite, boundless, without “when,” without “where,” inconceivable, unalterable, unchangeable, supernatural, luminous, ultra-ineffable…”

Not yesterday nor today, neither sword nor fire has succeeded nor can prevail over the faith of our nation’s children which is anchored in our Lord Jesus Christ. The proof is in the grandchildren of Genocide martyrs and survivors who dedicated their young lives to the altar of sacrifice for nation, for homeland, and for faith. The proof is in our latest war, during which members of the Armenian army and volunteer units, young and old alike, with faith in the Resurrection valiantly fought against the militarily superior Azeri-Turkish forces in defense of homes, churches, lives and lands, and who fell on the same lands liberated by the blood of their forefathers, at the foot of craggy mountains, impenetrable passages, and alongside delicate valleys, their spirits chanting, “Is it possible that I can follow as You ascend Golgotha with the Cross on Your shoulders? But what strong allure, what fierce power is that, which also leads me there alongside You” (Archbishop Yeghishe Tourian).

“For whatever is born of God overcomes the world. And this is the victory that has overcome the world – our faith” (1 John 5:4). Yes, our martyrs overcame the world because the faith of our nation is truth reinforced by the Risen Christ and invites us to profess the message of the Resurrection as our guide and path; the path sanctified by Christ’s blood which will lead us to triumphant heights, the promise of which we received at the outset from the heavens, from Jesus Himself Who proclaimed, “I am the resurrection and the life. He who believes in Me, though he may die, he shall live” (John 11:25).

Heaven and earth are reconciled through the Resurrected,
The doors above are opened,
From where heavenly melodies are heard,
And golden reverberations flutter from the hands of angels,
While below, at that very moment, oh what marvel,
As the hearts of those belonging to Jesus beat with elation,
Christ is Risen, good tidings.

The bonds of sin are released, chains are shattered, curses are unraveled, deserts become lush, dried rivers flow, fountains murmur, and the lion and the lamb pasture together as man is embraced by his Creator. The rainbow arches across the horizon once again, the Cross beams from the sky, and God, the Holy Spirit in the form of a dove, an olive branch in its beak, ascends to the heavens.

With these inspired sentiments and with the living hope of the Resurrection, from the Western Prelacy we extend our greetings and heartfelt congratulations to our clergy, councils, parishes, schools, organizations, and faithful, exclaiming,

Christ is risen from the dead, blessed is the Resurrection of Christ.
With Christian love