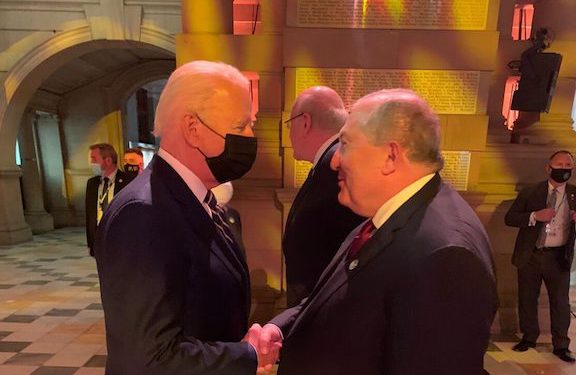 President Armen Sarkissian (right) had discussions with President Joe Biden and other world leaders during a climate summit in Glasgow, Scotland

In an address to the United Nations Convention on Climate Change in Glasgow, Scotland, President Armen Sarkissian warned that Azerbaijan’s use of illegal weapons during its aggressive attack on Artsakh last year caused an environmental disaster.

“Exactly one year ago during its war against Nagorno-Karabakh Azerbaijan used internationally banned weapons to target not only civilians but also beautiful forests of the large area, causing massive forest fires and creating environmental disasters. We call on international community to step up its efforts to prevent such irresponsible, inhumane behavior,” said President Sarkissian.

“The environmental challenges do not recognize borders and conflict lines, and we should bring all states of the world into comprehensive cooperation,” the president added.

He went on to say that Armenia is committed to becoming a “smart state” and is dedicated to fighting climate change and preserving the environment.

“If we change our mentality and form our ambition and strategy, then we can effectively use the finances and the wealth that the world has created during this phenomenal development and use the technology to handle the problems that we are facing. But not only to resolve the problems but also to create the basis of development to the brighter future years to come,” advised President Sarkissian.

“Armenia is committed to becoming a really Smart State, devoted to our Nature, Planet and Humanity. And I’m optimistic that we can overcome these difficulties and build a brighter future for all of us,” added Sarkissian.

According to the World Bank analysis, Armenia is the fourth most vulnerable country to climate change in the Eastern Europe and Central Asia region. Armenia has registered a 1.3-degree Celsius increase in temperature, and a nine percent decrease in precipitation.

Sarkissian told the conference that Armenia’s long-term objective is to achieve climate neutrality in the second half of this century. “Transition to climate neutrality is at the core of the country’s energy independence, energy security and green growth policies,” said Sarkissian, who highlighted the imperative for creative approaches to tackling climate change.

He told the conference about Armenia’s “Debt-for-Climate Swap” initiative, which he said “presents a new climate finance instrument. And it will help developing countries to adapt more efficiently to climate change finance, provides new economic opportunities.”

On the margins of the conference, Sarkissian met with President Joseph Biden and other world leaders, among them President Emanuel Macron of France and German Chancellor Angela Merkel among others.

Sarkissian arrived in Glascow on Monday and was welcomed by British Prime Minister Boris Johnson and U.N. Secretary-General Antonio Guterres.