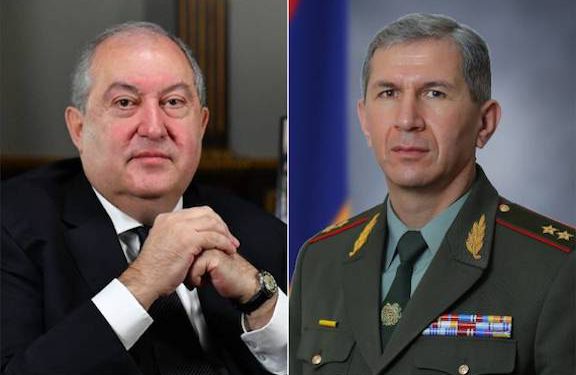 President Armen Sarkissian on Tuesday again did not sign a request by Prime Minister Nikol Pashinyan firing the Chief of Staff of Armenia’s Armed Forces Colonel-General Onik Gasparyan, who on Thursday called for Pashinyan’s resignation. Instead, the president’s office said that he would refer the matter to Armenia’s Constitutional Court.

Soon after Gasparyan and 40 other high-ranking military officials called for Pashinyan’s resignation last week, the prime minister sent a decree to Sarkissian relieving Gasparyan from his duties.
On Saturday, Sarkissian refused to sign the decree questioning its constitutionality and drive Armenia deeper into a domestic crisis, which has been brewing since Pashinyan signed the November 9 agreement that ended military actions in Karabakh, but surrendered territories in Artsakh and Armenia to Azerbaijan.

Sarkissian instead met with the Armed Forces staff, as well as Gasparyan to discuss the situation. He also held meetings with political factions, including the Homeland Salvation Movement, which welcomed the military brass’ statement.

On Tuesday, according to a statement from his office, President Sarkissian did not sign the latest request and announced that he will refer the matter to the Constitutional Court. He has until Thursday to submit that request.

“The Prime Minister’s substantiations regarding not accepting the President’s objections on the draft decree on the dismissal were studied. Clearly, this situation is a result of existing disagreements – at times with highly personal approaches – among the political and military figures in the war and post-war period,” the president’ office said Tuesday, noting that the president’s objections were also based on problematic interpretations of the law, the practice of applying the law and the potential loopholes in the law.

“In his previous statements the President stressed that a speedy and constitutional resolution of the issue is of primary importance for the security and stability of Armenia and Artsakh and is an absolute necessity for preservation of statehood, for preventing a further division of society, for restoring national unity and public solidarity, overcoming the uncertain situation and reaching a final solution,” said the president’s office in a statement on Tuesday.

“By remaining faithful to his commitment, the President will continue steps aimed at further stabilizing the situation, and, by serving the institute of the president as a platform, is calling on everyone to negotiate to find a comprehensive solution to all existing problems,” added the statement on Tuesday.

Since the president’s actions on Tuesday were not a flat-out rejection of the dismissal request by Pashinyan, the Homeland Salvation Movement called for an immediate meeting with the Sarkissian to address the matter.

Armenian Revolutionary Federation Supreme Council of Armenia member Artsvik Minasyan, in an interview with tert.am called on Sarkissian to reject Pashinyan’s firing of the Armed Forces chief of staff.