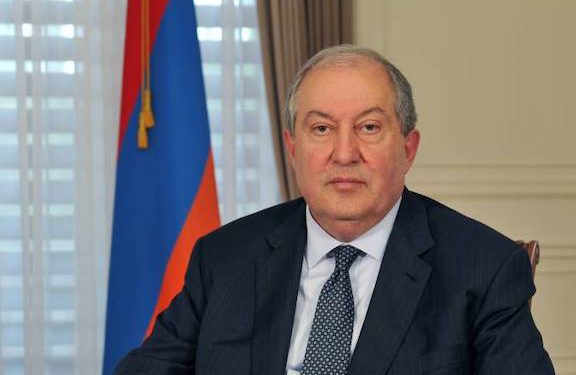 An announcement earlier Thursday by Armenia’s top military brass calling for Prime Minister Nikol Pashinyan’s resignation has thrust the country into a political crisis with forces in opposition to and in support of the government taking to the streets.

President Armen Sarkissian issued a statement, in which he vowed to use the powers of his office to mitigate tensions and arrive at a peaceful resolution to the current domestic crisis, which has been brewing since Pashinyan signed the November 9 agreement that ended military actions in Karabakh, but saw the surrender of territories in Artsakh and Armenia to Azerbaijan.

Sarkissian, who soon after the end of the war called for Pashinyan’s resignation and has reiterated that position several times, on Thursday called for restrains by all forces—governing and opposition—warning that the country must not be taken on a road that can have irreversible consequences.

“Today, when we not yet fully overcome the consequences of the war unleashed against Artsakh,” said Sarkissian. “When there are still thousands of dead and wounded, when there are serious regional threats, unfortunately, we, once again, find ourselves in a critical situation, which could lead to unpredictable consequences for our country and the Armenian state that could have irreversible losses.”

Reminding the public that the martial law declared soon after Azerbaijan’s attacks on Artsakh is still in effect, the president said the external threats facing Armenia are real, adding that the November 9 statement “is not a peace treaty. Armenia and Artsakh are facing multiple challenges.”

“I call on everyone – the state authorities, law enforcement agencies, political forces and all citizens to show restraint and common sense. Any reckless speech or action increases the tensions and further deepens the crisis. Do not give in to provocations and refrain from enmity and intolerance. Our people cannot allow divisions. Any attempt to destabilize the country and endanger the statehood must be rejected,” said Sarkissian adding that any action must be taken within the confines of the Constitution.

“I am urgently initiating steps aimed at finding ways to mitigate tensions and to peacefully resolve the situation,” said Sarkissian. “Taking the country into disorder will be disrespect to the memory of the thousands of our sons who fell during the war,” who called for restraint and vigilance by the citizens.

On Thursday evening, Sarkissian’s office issued a statement regarding Pashinyan’s firing of Colonel-General Onik Gasparyan, who had called for the prime minister’s resignation earlier in the day.

During  a rally in Yerevan earlier in the day Pashinyan had said that the president must sign the decision to remove Gasparyan from office.

“If the president of the republic does not sign that motion does it mean he is joining the coup d’etat?” Pashinyan said.

“In the existing situation nobody must try to draw the president into political processes in any way,” Sarkissian’s office said in the Thursday evening statemetn. “Any attempt to put pressure on the president is unacceptable.”

The president’s office pointed out that Armenia’s Constitution allows the president three days to sign or reject decrees proposed by the prime minister.

“Based on the need to ensure the normal functioning of state bodies, the president has until now not objected to the appointment and dismissal of state officials [proposed by the prime minister.] But amid martial law and the existing crisis, the dismissal of the chief of the General Staff of the Armed Forces after the above-mentioned statement [by the military] would not be a regular personnel change,” the president’s office said, emphasizing the army’s crucial role in defending Armenia.