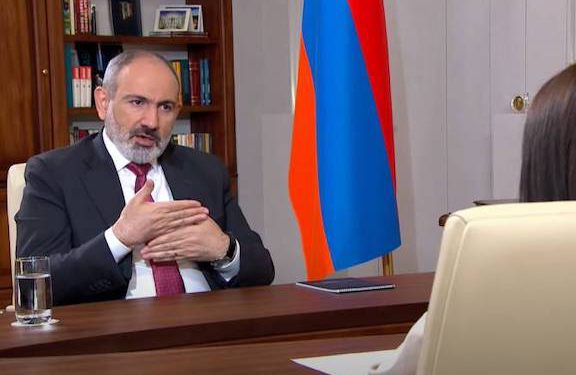 Pashinyan has not held in-person news conferences in Armenia since the outbreak of the coronavirus pandemic in 2020, giving instead interviews to a limited number of domestic news organizations, virtually all of them controlled by or loyal to his administration.

In November and December 2021 and January this year, he also organized three virtual briefings supposedly open to all mass media. Journalists as well as bloggers and civic activists had to submit their questions in advance and hope that they will be answered.

They were invited to do so again late last week, with the Armenian government’s press office saying that Pashinyan will answer their questions on Monday evening.

In an ensuing joint statement, several media outlets, including RFE/RL’s Armenian Service, urged the prime minister to revert to in-person news conferences, arguing that Pashinyan’s government lifted practically all coronavirus-related restrictions earlier this year. They also said that many of their questions sent ahead of the previous virtual briefings were ignored by the 47-year-old former journalist or “distorted” by his staff.

“As a result, the public’s ability to receive proper information [from the government] was effectively restricted,” said the statement.

“Experience shows that such ‘online contacts’ are held under a pre-planned scenario and mainly feature questions by pro-government media outlets, Telegram channels and bloggers that are apparently agreed with the organizers of the events,” read a separate statement issued by them.

Pashinyan and his office did not publicly respond to the criticism. His declared news conference went ahead as planned.

Boris Navasardyan, the chairman of the Yerevan Press Club, agreed that Pashinyan has used the virtual format of the briefings to skirt unpleasant questions preoccupying the public.

“The overall impression is that the prime minister mostly concentrates on topics and messages that he needs,” said Navasardyan.

“A stage-managed news conference doesn’t allow a journalist to directly ask a question and, if necessary, follow-up questions,” argued Hakob Karapetyan, the editor of the fact-checking website fip.am.

Karapetian pointed out that Pashinyan, who used to edit a newspaper, has increasingly limited his contacts with the media since coming to power in 2018. According to his calculations, the prime minister gave only five interviews last year, sharply down from 34 interviews in 2020.