Procession of Torches to Dzidzernagapert Emphasizes Justice for Genocide 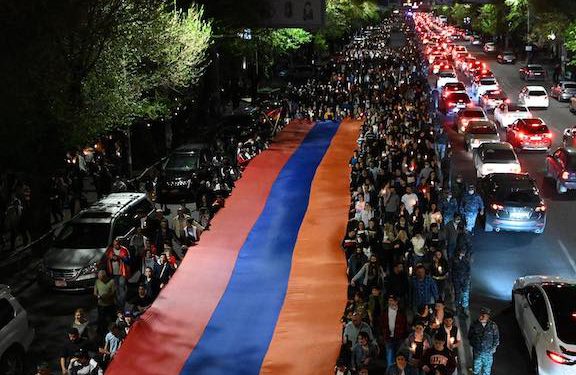 A procession of torches to the Dzidzernagapert Memorial Complex on the eve of the anniversary of the Armenian Genocide has become a storied tradition in Armenia.

With last year’s event being cancelled due to the COVID-19 pandemic, this year, ARF Youth Organization of Armenia and the ARF Nikol Aghabalyan Student Association reclaimed the mantle and led the procession through the streets of Yerevan, from Freedom Square to Dzidzernagapert on Friday.

In remarks made at the square, Armenian Revolutionary Federation Bureau chairman Hagop Der Khachadourian said that April 24 is no longer a day of mourning, but rather call for justice in the spirit of our nation’s demands.

The ARF leader explained that for the past 60 to 70 years, April 24 has become a day of rebirth for the Armenian people. “In the 1960s our people, as if having been resurrected, took to the streets of Yerevan and around the world demanding the return of our lands. This was the first indication that we have advanced from commemorating our martyrs toward demanding justice,” said Der Khachadourian.

Thousands of youth taking part in the procession, raised the flags of all the nations that have recognized the Armenian Genocide, and while singing patriotic songs and chanting slogans ascended to the Dzidzernagapert Memorial Complex to commemorate the victims of the Genocide.

While at Dzidzernagapert, a moment of silence was observed in memory of the 1.5 million martyrs of the Armenian Genocide. They paid their respects to the countries that have recognized the Genocide in front of th eternal flame, where wreaths were placed a requiem service was held.

‘We Remember. We Demand. We Will Liberate’

A similar procession of torches was held in Artsakh on Friday, organized by the ARF Youth Organization and the ARF Aram Manoukian Student Association, and with the motto of “We Remember. We Demand. and We Will Liberate.”

The procession began from the courtyard of Stepanakert’s St. John Church and headed toward the city’s memorial complex.