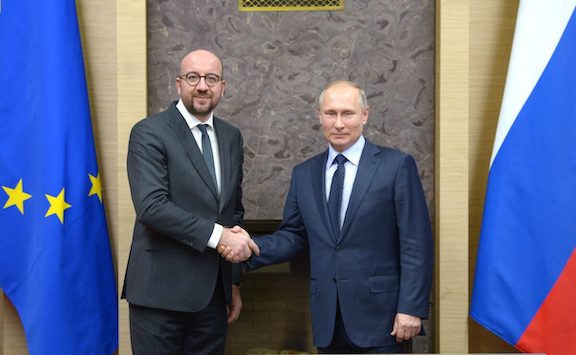 According to a Kremlin statement Putin stressed the importance of further implementation of the statements by the leaders of Russia, Azerbaijan and Armenia.

“The current situation around Nagorno-Karabakh was discussed, taking into account the importance of further consistent implementation of the statements of the leaders of Russia, Azerbaijan and Armenia of November 9, 2020 and January 11, 2021,” the Kremlin said Monday.

“Among the priority tasks are the unblocking of economic and transport links in the region, the solution of humanitarian problems of the population. Charles Michel expressed support for the work being carried out, including through the co-chairs of the OSCE Minsk Group (Russia, USA, France),” the Kremlin added.

On Friday, Michel said that during his meeting with Armenia’s Acting Prime Minister Nikol Pashinyan and in a call with Azerbaijani President Ilham Aliyev he urged the two countries to resume negotiations over the border standoff, saying stability in the South Caucasus was important for the European Union.

“The EU is ready to provide expertise on border delimitation and demarcation and to support confidence building,” said Michel. “The European Union also encourages both parties to cooperate, as matter of urgency, on the return of detainees and full transparency with regard to mine fields, and other important humanitarian issues.”

Michel, who met with Pashinyan last week in Brussels, said he called on both sides to engage in renewed negotiations “in a constructive spirit.”

“The European Union has a profound interest in the security, stability and prosperity of the South Caucasus region as an integral part of the EU’s Eastern Partnership,” Michel added last week.