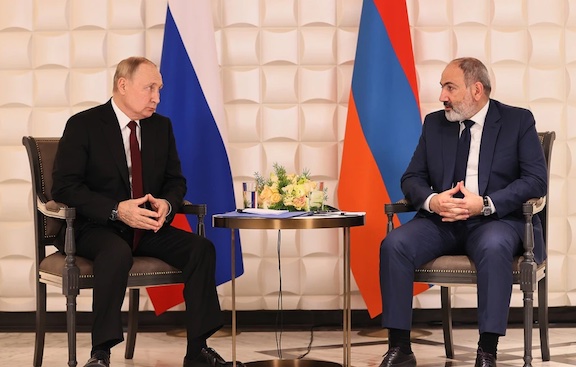 President Vladimir Putin of Russia and Prime Minister Nikol Pashinyan discussed the settlement of the Nagorno-Karabakh conflict when they met on Wednesday on the margins of a Collective Security Treaty Organization summit being held in Yerevan.

The meeting, which took place following the summit, also focused on regional security issues, as well as bilateral ties between the two counties.

“When we met, coming by car, we discussed issues of regional nature, including issues related to regional settlement, we talked about unblocking transport infrastructure. I am very happy that there is an opportunity to hold a bilateral meeting within the framework of today’s events,” Putin said before the meeting with Pashinyan.

The Armenian leader said that he had touched on various issues during the CSTO summit that addressed Yerevan’s concerns about the region’s security and stability.

“I spoke about maintaining the agreements reached by trilateral statements, which we adopted with your assistance and mediation with the president of Azerbaijan. These are very important issues, which of course we should discuss, as well as discuss the agenda, which we hope will bring long-lasting peace in our region,” Pashinyan said.

Earlier on Wednesday, during the CSTO summit, Putin told the participants of the need for a comprehensive resolution to the Nagorno-Karabakh conflict.

“I agree with my colleagues who spoke earlier about this issue and the efforts to achieve a comprehensive settlement of the Armenian-Azerbaijani conflict. Of course, these are sensitive issues that require our attention,” Putin said, according to the RIA Novosti newspaper.

Putin added that the agreements reached between the leaders of Armenia, Azerbaijan and Russia in Sochi at the end of October “created a good basis for future compromises on fundamental issues.”

“Only by consistently fulfilling these (previously reached) agreements on border delimitation, unblocking transport communications and humanitarian issues, we can achieve a sustainable settlement of relations between Armenia and Azerbaijan. We hope that this will ultimately lead to the conclusion of a peace treaty between Yerevan and Baku,” Putin added.

Pashinyan also met with the newly-re-elected president of Kazakhstan, Kassym-Jomart Tokayev, who expressed hope that the Russian peacekeeping mission will be able to normalize the Armenian-Azerbaijani relations, RIA Novosti reported.

“We are all interested in the normalization of relations between Armenia and Azerbaijan. We hope that the peacekeeping efforts of the Russian side will make it possible to resolve the Armenian-Azerbaijani conflict exclusively through political and diplomatic means and lead the parties to sign a peace treaty,” Tokayev said.