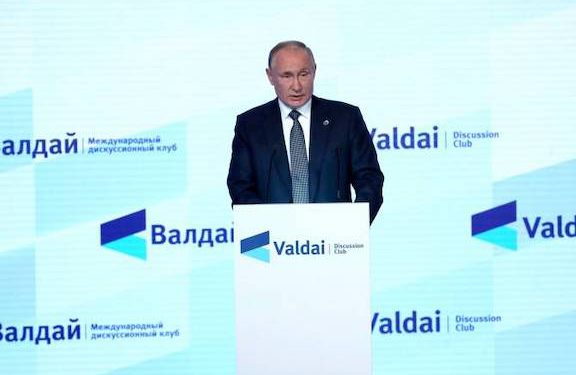 President Vladimir Putin of Russia on Friday called on Armenia and Azerbaijan to make concession in the ongoing border dispute that has arisen since the signing of the Russian-brokered November 9 agreement, adding that Russia alone can guarantee the establishment of relations between Yerevan and Baku.

“The main thing now is to finally resolve the situation on the [Armenian-Azerbaijani] border, and it’s impossible to do anything here without Russia’s participation,” Putin said Thursday during a discussion at Moscow’s Valdai Club, in response to a question regarding the situation in the South Caucasus.

“We probably don’t need anyone except Russia and the two sides. Why? … Because the Russian army’s General Staff has maps showing the borders that existed between Soviet republics in Soviet times,” added Putin, hinting the drawn out discussions being held on the so-called demarcation and delimitation of the borders will take Armenia back to its Soviet reality.

He expressed confidence that the tough decisions about this process can be achieved through concessions by both Armenia and Azerbaijan, which he said must accept the agreements that have been reached and assess the advantages that for each country.

The Russia leader, again, pushed for the need to open the “communication links” in the region, saying Azerbaijan in interested in access to Nakhichevan and Armenia will benefit from economic development, for which it will have to normalize relations with Turkey.

He said the main goal is to create a secure situation and “build relations in the future with a positive perspective,” emphasizing the the most important component is for Armenia and Azerbaijan to establish relations.

Tensions on the border between the two countries have been escalating since May, when Azerbaijani forces breached Armenia’s sovereign territory and set up positions in the Gegharkunik and Syunik provinces. Since then sporadic cross-border shootings by Azerbaijan have left several soldiers dead and many wounded, with the shooting also extending to Armenia’s Ararat Province, bordering Nakhichevan.

Putin lamented the loss of life, but praised Prime Minister Nikol Pashinyan and Azerbaijan’s President Ilham Aliyev for what he called managing the bloodshed.

The Russia leader also said that in addition to the border discussions, there was room for discussion of a settlement through the OSCE Minsk Group co-chairs. Despite Russia being one of the co-chairs, Moscow has been attempting to keep the other two—France and the United States—at arm’s length.

On Thursday, Russia’s Foreign Ministry spokesperson Maria Zakharova accused the U.S. of “obstructing” effort for regional peace, referring to a scheme devised by Ankara and Baku—known as the “3 + 3” format—which envisions a regional partnership and direct links between Georgia, Armenia, Azerbaijan, Turkey, Russia and Iran.